The original see was founded by St Wilfrid in 681 at Selsey (about 8 miles away on the coast), but was moved to a site which already contained a Saxon church at Chichester by the Normans in 1075, as a part of their policy of moving sees to larger centers of population. However it is one of the smaller and historically poorer dioceses, hemmed in as it is by the lands of Canterbury, London and Winchester, and with the major foundations at Lewes and Battle outside of its control.

Construction of the cathedral began under Bishop Stigand in 1076 but only really got under way under Bishop Ralph de Luffa in 1091 – the presbytery was completed and dedicated in 1108. Building out of the nave started following a fire in 1114, with the eastern part completed by 1123 and the remainder around 1148: the more or less complete church was consecrated by Bishop Seffrid in 1184. However, another much larger fire in 1189 destroyed the church and much of the city, requiring a significant rebuilding effort and a re-dedication of the church in 1199. This church forms the bulk of today’s structure, an eight-bay nave, transepts, crossing and a three-bay quire. Most of the stone came from the quarries at Quarr Abbey on the Isle of White (which also provided the stone for some of the contemporaneous work at Canterbury).

The 1189 fire required the repair and rebuilding of the clerestory level in the nave, with Gothic additions to the columns on the nave-side but leaving intact the original Norman work on the aisle-side, and the construction of a new central tower and a ribbed stone vault. A row of chapels was added on each side of the nave forming double aisles similar to chose found in many French cathedrals, but very unusual in England. Although its overall proportions are somewhat modest, the chapels built along the north and south aisles make Chichester the second-widest cathedral in England.

With this construction underway, the opportunity was taken to rebuild the quire and add a retrochoir (in Early English Gothic), with both rounded and pointed arches, embroidering on the underlying Norman structure where-ever possible, and using the common English motif of shafts of dark Purbeck marble. In 1262, Richard de le Wyche, who was Bishop from 1245 to 1253, was canonized as St Richard of Chichester and in 1279 St Richard’s remains were reburied in the retrochoir in the presence of Edward I, signaling the completion of the major rebuilding effort and making the cathedral a place of pilgrimage to his shrine.

Construction work went on well into the 13th century, including the elegant Lady Chapel in Decorated Gothic toward the end of the century, remodeling of the south transept, and the cloisters, completed around 1400. Finally, at the end of the 14th century, a spire was added to the central tower, similar in style to that at Salisbury, but not as tall. Later the elegant stone pulpitum, the Arundel screen, was inserted between the nave and quire – this was removed as a part of the victorian ‘improvements’ in the middle of the 19th century, but reinstated in 1961 .

The building always suffered from poor foundations causing the roof to sag, which was addressed in the mid-12th century by adding flying buttresses and a new roof. In 1210 the south-west tower of the façade collapsed and had to be rebuilt and in 1635 the north-west tower also collapsed and wasn’t rebuilt until 1901. Because of these structural weaknesses, a separate bell tower was constructed in the 15th century, a very unusual addition in England. There was some sensitive restoration in the 1840s and 50s: however in 1861 the central tower collapsed requiring a replica to be constructed by Scott. The cathedral sits right at the city center, adjacent to the market cross, and in an intimate way is at the heart of the medieval city. 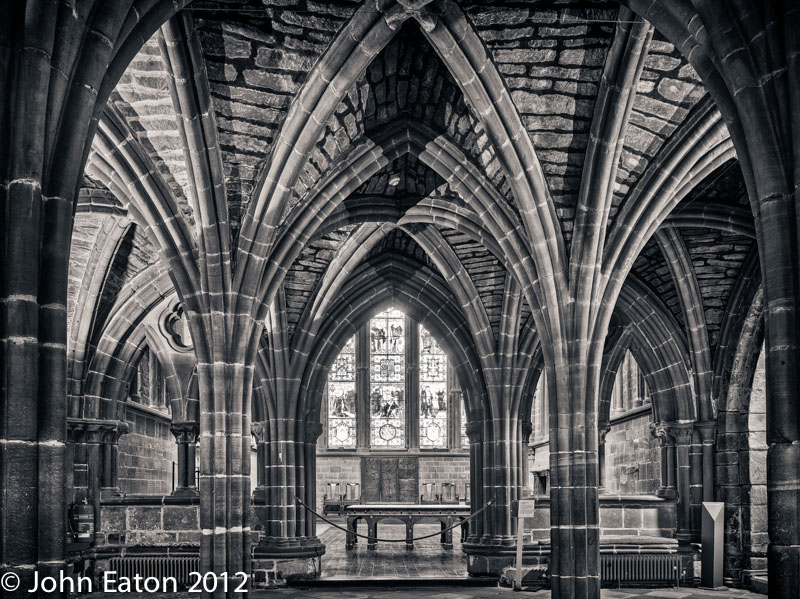