Tradition has it that the first church on this site was built by Aldhelm in 705, though the first confirmed historical record is when the diocese was created in 909 it became a cathedral. In honor of this the church was rebuilt in stone and survived past the Conquest. Early in the 12th century, Bishop Robert of Lewes initiated its reconstruction and, by 1148, a new Norman church was ready to be consecrated. However, following the Conquest, Bishop John de Villula moved the see to Bath in 1090 and Wells reverted to a church with secular priests.

Wells is one of the finest and most beautiful of English cathedrals and a wonderful example of Early English, though with many subsequent additions – it was the first fully Gothic cathedral to be built in England and perhaps anywhere. Construction was begun on the present building around 1179 by Bishop de Bohun, but continued on and off for the next 300 years. When the original Norman church was demolished and the new building started, Wells was not a cathedral, though it was campaigning to have its status restored, and the magnificence of the design and execution of the new building was intended to directly support this claim. It was an extraordinarily advanced and precocious design for its time, certainly ranking with the work at Lincoln and Canterbury (Wells was the first to use pointed arches exclusively). The campaign succeeded in 1245 when the church became Wells cathedral and the title of ‘Bishop of Bath and Wells’ was created.

As was usual, the quire and east end was built first (though later extended), and the nave was completed by 1229, by Bishop Jocelyn, with simple, rather noble, pointed arches and a relatively cool, austere quality. The new building was consecrated (though not necessarily completed) in 1239. Outside the glorious, unique west façade was completed by 1248 – it’s one of the cathedral’s most beautiful features, an image screen originally containing more than 300 statues (of which about half survive today), the most magnificent array of medieval sculpture in England. The two towers were added at the end of the 14th and beginning of the 15th centuries and, like the central tower, originally had spires, which no longer survive. The cloisters were built around 1260 and rebuilt in the 15th century.

The east end was rebuilt, starting around 1285, in the Decorated style, resulting in some of the most magnificent and beautiful stone-work. The magnificent octagonal Chapter House and its vault were completed about 1306 – there is a wonderful approach up a flight of stone steps (made famous by Frederick Evans as “A Sea of Steps”). Its central pier is of sixteen shafts of Purbeck marble, supporting a fan of 32 ribs and is, to my mind, one of the most exquisite of any cathedral in England. Following on from this the quire (completed in 1337) and presbytery were extended eastwards, by Bishop Ralph, incorporating the octagonal, elegant Lady Chapel with its wonderful jewel-like glass (originally a separate building completed by 1326), creating the retro-choir (completed by 1363). The retrochoir is one of the most beautiful and delightful spaces, with a series of fine, slender pillars from which elegant fans support the vault and with a beautiful vista back into the quire.

On entering the cathedral, the most immediate feature is the "scissor" arches, ingeniously inserted in 1338 to support the weight of the then crumbling tower (it had been heightened around 1315) -- and they worked, it's still standing! – the upper part of the tower was rebuilt in Perpendicular and completed in the middle of the 15th century. At the Dissolution Wells suffered relatively little as a secular establishment, but during the Civil War it suffered some damage and fell into disrepair, but nowhere near as bad as those cathedrals that were totally destroyed and desecrated, such as Lichfield. There was some sensitive restoration in the 19th century, but nothing that detracted from the elegance and beauty of this building. 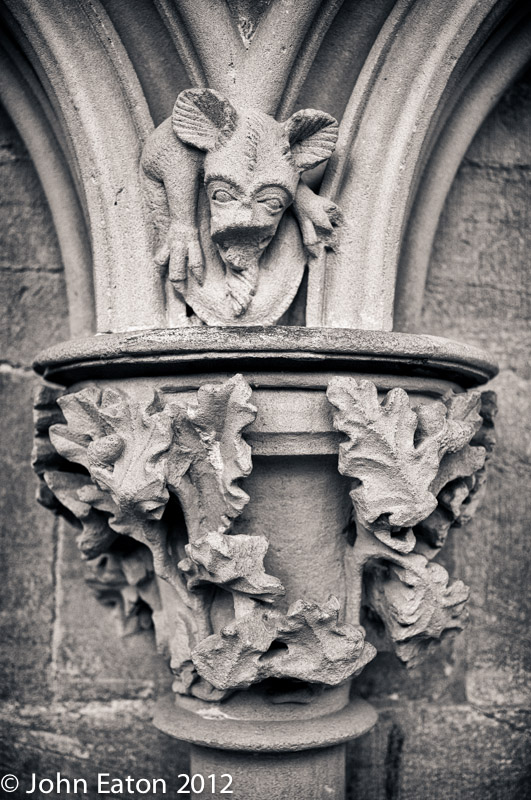