Lichfield has suffered physically more than most cathedrals: first, from the same problems as the other red sandstone cathedrals, from the friability and softness of its construction material; second, from major destruction and desecration during the Civil War and the time of Cromwell’s Commonwealth, when it suffered more than any other; and, finally, from unfortunate ‘improvements’ and restorations by the Victorians. Nevertheless, from the outside its unique three-towered outline is very impressive, located within a medieval close of ecclesiastical buildings, and the interior retains much of its beauty and charm.

Lichfield is a very old Christian site – founded in 656, by Bishop Diuma, followed by St Chad, Bishop of Mercia, 669-72. In 700 Bishop Hedda built a new church to house the bones of St Chad, an important destination for many pilgrims. In 786 Lichfield became the seat of an Archbishop when King Offa of Mercia decided that he wanted the bishops of his kingdom to owe allegiance to his archbishop, not to the Archbishop of Canterbury. However, the Archbishopric of Lichfield only lasted for 16 years, ending shortly after Offa’s death.

At the time of the Conquest Lichfield was an impressive and important site with two churches and a magnificent shrine to St Chad, and an enormous diocese that stretched from Warwickshire to Lancashire. However, after the Conquest it suffered – the see was temporarily transferred to St John’s in Chester in 1075 and then transferred back to Coventry after 1087 – finally, in 1148 Lichfield became joint see of the diocese with Coventry. Between 1085 and 1140 a Norman cathedral was built at Lichfield but the details of this early work were lost when all of Lichfield’s archives and records were destroyed during the Civil War.

Almost as soon as this Norman church was complete, building what is the present structure started, first with the presbytery and quire around 1200-20, then with the transepts around 1230-40: none of this Norman church survived the rebuilding or destruction of the 17th century. In 1249 the octagonal two-story Chapter House was completed (after the ravages of the Civil war, this was the only part of the building with an intact roof). And by 1289 the Early English nave was finished, with magnificent columns, especially those supporting the tower and triforium. This was followed early in the 14th century by rebuilding of the west front and the three towers, with their spires complete by about 1330. Attention then returned to the east end with the new Lady Chapel, initiated by Bishop Langton, completed by 1330 (including a shrine to St Chad) and the rebuilding of the presbytery and quire, begun in 1320 and complete by 1338, adding the present clerestory.

The Decorated Gothic Lady Chapel is the architectural high point of the church, with its apsed east end, steep vault, and very fine, tall windows – the windows were filled with 16th century medieval glass from the Cisterian Abbey of Herkenrode in Belgiun in 1803. Rising to the same height as the rest of the building, it thus provides a magnificent vista from one end to the other (slightly marred by the fact that the nave and quire are not exactly aligned with each other – looking east, the quire curves off to the north!).

After the end of the 14th century little additional building was carried out, other than to repair the ravages of nature and war. During the Civil War the cathedral was laid siege to three times and the interior desecrated and destroyed by Cromwell’s troops and no medieval glass survived. In 1646 the central spire collapsed and in 1660 it was recorded that there were no roofs at all, except that on the Chapter House. Bishop Hackett paid for some essential repair and restoration work out of his own pocket from 1662-68, but the cathedral was neglected for much of the 18th century and it was not until the end of the century that Wyatt undertook major (and much needed structural work), followed by the repairs and ‘improvements’ of Scott in the 19th century, which is actually much of what we see today.

The majority of the exterior is Victorian reconstruction, repairing earlier vandalism or the impact of the elements on the soft stone. In 2003, an 8th century sculpted limestone panel of the Archangel Gabriel was discovered under the nave, it is thought to be part of a stone chest containing the relics of St Chad. Most of the external carvings are (poor) Victorian replacements, but the unique silhouette and internal harmony and serenity make this a beautiful and often overlooked cathedral, situated as it is in one of the most unspoilt cathedral close’s in the country. 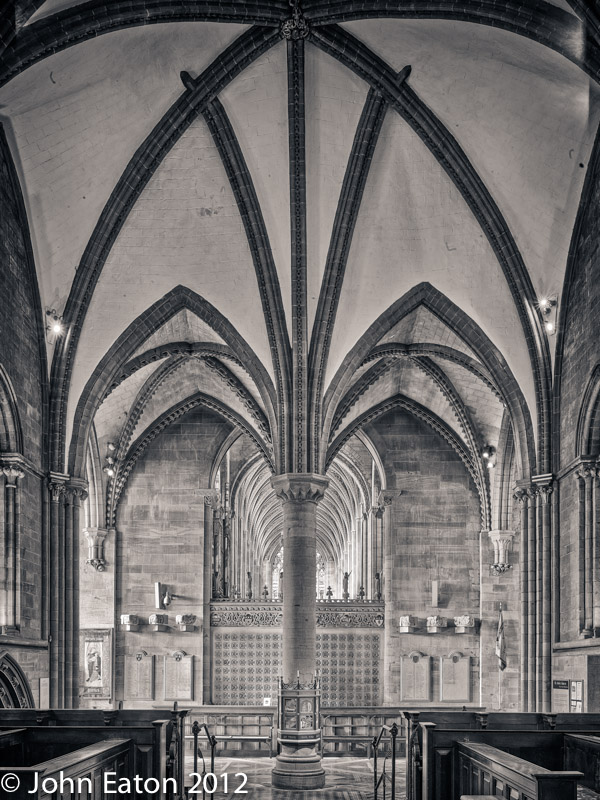