Oxford cathedral is unique in being the only cathedral that also serves as a college chapel (to Christ Church college) – it is also the smallest English cathedral and smaller, for example, than Kings College Chapel at Cambridge,

There was an early Saxon church on the site from the 8th century when St Frideswide founded a priory. This had a somewhat turbulent history, including being burnt by the Danes in 1002, before becoming an Augustine foundation in 1122. The priory church was rebuilt and expanded toward the end of the 12th century when the cult of St Frideswide experienced a major revival and became a useful source of income (likely influenced by the pilgrimages to Becket’s shrine in Canterbury): the relics of St Frideswide were transferred to the present building in 1180.

Adding the Lady Chapel and Latin Chapel to the north of the quire in the 13th and 14th centuries created a complex internal space and resulted in an almost square cathedral. The Latin Chapel contains a fine set of 15th century stalls and the watching-loft of St Frideswide’s shrine incorporates a magnificent Perpendicular wood and stone screen. The most striking part of the cathedral is the stunning and very beautiful quire vault – a pendantlierne vault constructed at the end of the 15th century.

Never a very large church to begin with, it got smaller when, in 1525, Cardinal Wolsey demolished the last three bays of the nave to make way for the quad of his new college (to be called Cardinal college): his intent was to demolish the church entirely. However, Wolsey had a falling out with Henry VIII before his plans could be completed and Henry re-founded the college as Christ Church in 1546 and made the church a cathedral in 1547.

As Henry’s college chapel, it was unscathed during the Dissolution but, ufortunately, it couldn’t avoid the attentions of the Victorian restorers and the new east end and circular window is the work of Scott – however, some 19th century glass designed by Bourne-Jones works very well indeed. 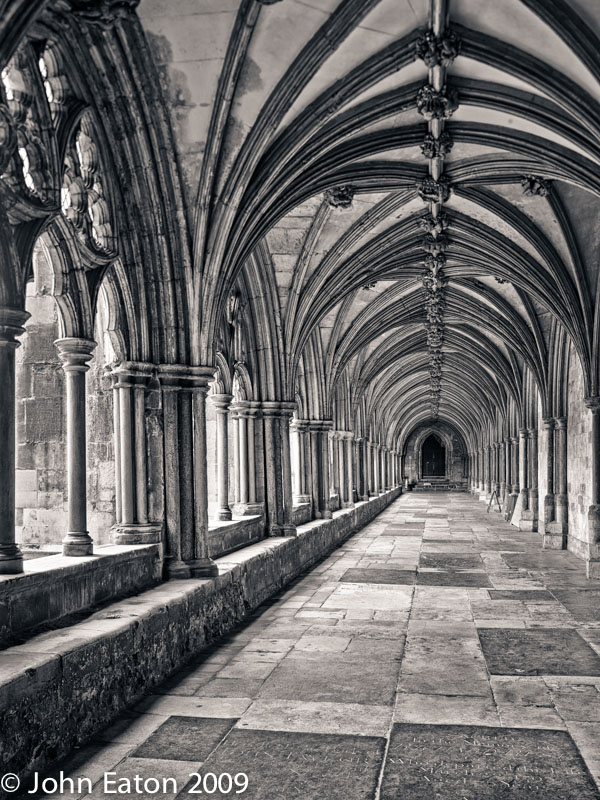