Salisbury cathedral is one of the few English cathedrals that has integrity as a whole, as it was built in a single effort (from 1220 to 1380, but most of it was completed within the first 40 years by 1260), rather than the various additions and rebuilding that others were subject to. This arose because the site of the original Norman cathedral (at Old Sarum) was deemed to be unsatisfactory, so a new building was planned on a totally new site, around which the present city of Salisbury grew up. The old see had been transferred from Sherborne to Old Sarum in 1075 where a small cathedral was completed by 1092, subsequently enlarged early in the 12th century, but by 1220 it was decided that the site had to be moved.

Construction was rapid: the foundation stones were laid in 1220 by Bishop Poore; the altars at the east end were consecrated in 1225; the nave, transepts and quire were completed by 1258 when consecration of the building took place in the presence of Henry III; the west front was finished by 1265; the nave vaulting was completed around 1266; a stand-alone campanile was also completed to the north-west around the same time, but no longer exists as it was removed by Wyatt in the 18th century; and the chapter house and cloisters were finished before 1300 (though as a home for secular canons, not monks, strictly speaking it didn’t need cloisters).

In the 1330s the crossing tower was heightened and the spire added. Externally, the most notable feature of Salisbury is the spire, at 404 feet the tallest in England – the weight of the immense tower and spire has caused concern and in the 15th century large strainer arches were installed at the nave crossing. Also, the structure makes extensive use of flying buttresses to take the weight of the vault enabling much of the walls to be given over to fine lancet windows – this is one of the very first instances of flying buttresses being a key element of the design of a cathedral from the outset. In 1668 Christopher Wren made a report on the cathedral, praising the proportions and simplicity, but criticizing the inadequate foundations and buttressing, and recommending bracing in the spire.

Because of the manner of its foundation, the cathedral represents a unique example of Early English architecture. The plan was not altered at all from its original design (unlike most other cathedral construction, where changes were common as work progressed) and is extremely elegant and simple, with great unity of style and sense of refinement. The interior of the nave is beautifully proportioned with slender dark pillars of Purbeck marble contrasting with the light Chilmark limestone (the quarry is only 12 miles away) and a continuous series of lancet arches forming the arcade, a fairly low, cramped triforium (which is perhaps the only weakness in the design), and three lancet windows in each bay of the clerestory providing wonderful lighting from above.

The Lady Chapel and retrochoir have extremely graceful piers in Purbeck marble and the vista to the west from the retrochoir is very special. The continuity of design progresses right round the east end, with five pointed arches at ground level, superimposed with a five-arch triforium, and three tall lancet windows above. The vault is a simple, elegant four-part rib-vault, with painted roundels in the quire and crossing (they are original designs from the 13th century, restored by the Victorians). The quire houses the largest and earliest complete set of stalls in England.

In contrast to several other cathedrals, the crossing under the central tower is not lit by high windows but is a natural continuation of the choir vault, and is very elegant. Salisbury also features a second set of transepts to the east of the crossing and its floor plan is noticeable for its ‘pure’ Gothic rectangular style and ‘balance’ between the space to the west and east of the crossing, in contrast to what one sees at Norwich, for example. The Chapter House is a very elegant octagonal building, with a slender central pillar – it is also noteworthy for housing the best-preserved copy of the Magna Carta.

During the Civil War the cathedral housed prisoners of war and, although much damage was done, it wasn’t as totally sacked and destroyed as some other cathedrals. In the 18th century Wyatt undertook some drastic restoration, approved by the bishop at the time Bishop Barrington, but roundly criticized since, removing the campanile and chantries, and ‘tidying-up’ the interior. The cathedral clock (originally in located in the bell tower that Wyatt demolished in 1792 but now found in the north nave aisle), is Europe’s oldest working clock, originally constructed around 1386. Scott tried to mitigate some of Wyatt’s damage with his own work, but eventually this too was removed in 1960. At Salisbury nothing was done to excess; the result is a serene, elegant and very beautiful building, appearing today much as it was in the 14th century, located in surroundings that are perhaps the most serene and beautiful of any English cathedral. 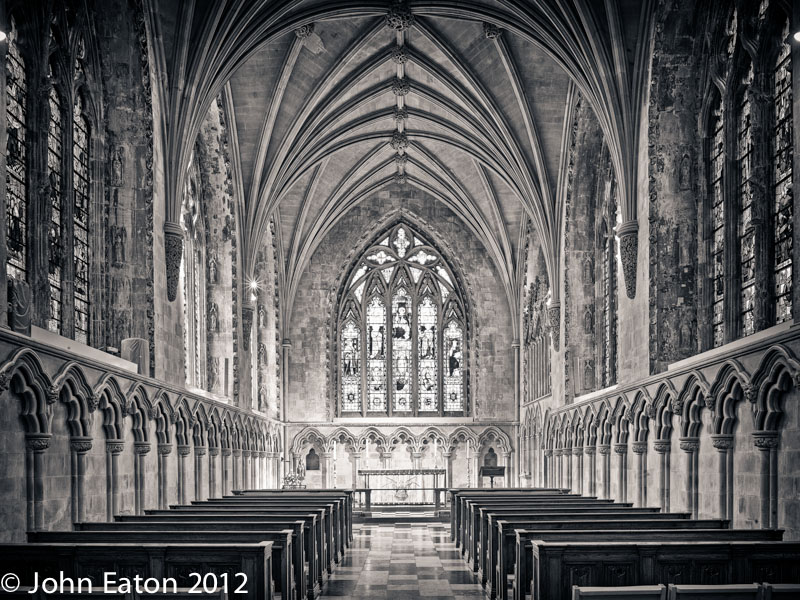