The city of Southwell has the distinction of being the smallest cathedral city in England and the cathedral has been called the ‘village cathedral’, though from the outside the distinctive cladding on the spires of the western towers give it a particularly Rhenish look. Founded, like Ripon, as a subsidiary seat of York and referred to as the Mother Church for Nottinghamshire and Derbyshire, it was eventually elevated to a cathedral in its own right in 1884.

The first church on this site was likely founded by Paulinus , the first Archbishop of York, early in the 7th century. In 956 King Eadwig gave a parcel of land in Southwell to the then Archbishop of York on which a new minster church was built. In 1108, the Norman rebuilding of this Saxon church was begun by Archbishop Thomas of York, as usual starting at the east end, and dismantling the old church and re-using much of the stone as work progressed. It is largely this Norman church that we see today in the rather heavy, severe Norman nave, contrasting with the light, elegant, later Gothic work in the quire and presbytery.

Work on the nave began around 1120 and the church was completed by the middle of the century. The nave is lined with typical massive, rather short, cylindrical Norman piers, with great arches at the crossing – simple, somewhat plain, but effective, with heavy triforium arches and unusual circular clerestory windows, as seen from the outside. The crossing arches are decorated with cable and wave and zig-zag designs, probably their first use in England. The stone used here is referred to as a ‘white’ sandstone which works well for the interiors -- much better than the red sandstone at Chester or Lichfield – but externally suffers to some degree the same disadvantage of rapid weathering.

Again, similar to other churches of the time, this building was soon deemed to be too small and, in 1234, Archbishop Walter de Gray of York decided it was time to rebuild and extended its east end. Designed in Early English Gothic, though only two-storied rather than the usual three, with fine shafts clustered in twos and threes contrasting with the unadorned drums of the nave piers. This produced a very serene and elegant example of the style and, benefitting from the prosperity of its farming community, was beautifully decorated. The presbytery was extended by four bays and a new chapel and east transepts added, all finished by around 1241 resulting in one of the finest achievements of the period.

This was followed in 1288 by the construction of a Chapter House, closely modeled on that at York – an octagonal structure, without a supporting central column, but here with a magnificent stone vault (in contrast to the wooden one at York). To emphasize the prosperity of the church and its local community, the Chapter House was lavishly decorated with stone carvings, which were executed with great freedom, imagination, and supreme skill to produce very realistic depictions of local plants. This is one of the oldest and finest examples of the development of high-quality, decorative stone-carving, unsurpassed anywhere in England at the time. Between 1320 and 1340 a gorgeous stone pulpitum was built in the Decorated style, with extravagant carvings, but different designs on its western and eastern sides. The final material additions to the structure were the very fine Perpendicular windows in the west end of the nave in the 15th century.

Although Southwell didn’t suffer much from the Dissolution, it did suffer greatly from destruction and pillaging during the Civil War, the church was seriously damaged and the adjoining palace was almost totally destroyed, and extensive repairs were necessary (luckily the church is the center of a fairly rich agricultural community). In 1711, the southwest spire was struck by lightning and the resulting fire spread through the roof to the crossing and nave -- the roofs were repaired by about 1720 with flat paneled ceilings. At the beginning of the 19th century it was determined that the spires were in danger of collapse and they were removed in 1805. It was not until Ewan Christian undertook major restoration of the fabric of the quire in 1879-1881 that they were re-erected and at the same time the pitched roofs to the nave and transepts were restored. Today we see a very beautiful and satisfying medieval building. 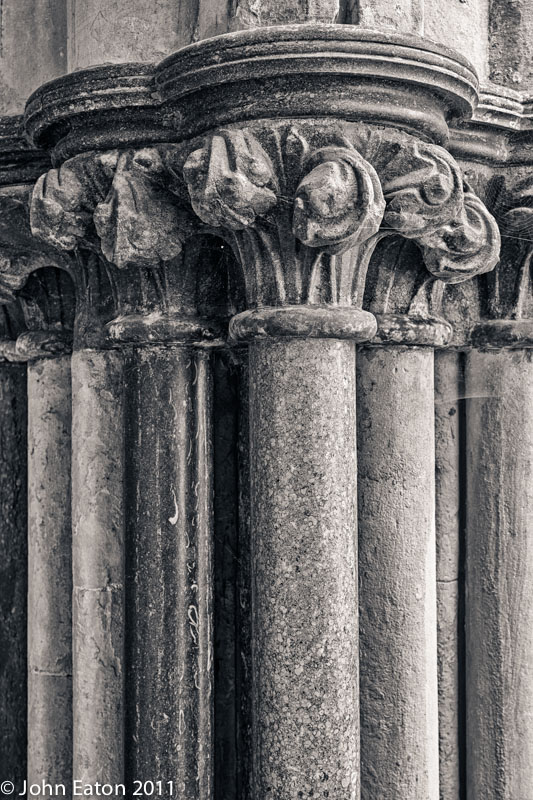