Founded in the 660s by Celtic monks, a Saxon church was built by St Wilfrid and dedicated in 672 – amazingly, the crypt of Wilfrid’s church still survives beneath the central crossing of the present church – though the church above ground was destroyed by King Eadred of Northumberland in 950. Ripon is one of the smallest English cathedrals and has existed largely in the shadow of its patron at York and, similar to the situation at Southwell, was referred to as a Bishops Seat and Mother Church within the York diocese. Ripon was raised to a cathedral in its own right in 1836.

After the Conquest, building at Ripon was undertaken by successive Archbishops of York, the first, built in the 11th century, being a traditional Norman church, almost none of which remains today. In the 1170s this church was rebuilt by Archbishop Roger Pont L’Eveque, as a smaller-scale replica of the work he had underway at York and, architecturally, it was rather advanced being some of the earliest work done in transitioning to the Early English style of Gothic architecture. As was the style at the time, the nave is relatively broad and low, without aisles, and with the arcade as a blind wall. After a pause, the west façade was completed in the 1220s in a mature Early English style, which remains to this day one of the best examples of its execution in its simplicity and elegance. In the interior of the church multiple different styles are reflected, a remarkable variety for any English cathedral and especially one so small. In addition to the original Norman work in the crypt and the Earl English work of Archbishop Roger, much of the nave is a result of a rebuilding in Perpendicular style.

In 1280 the east end of the church collapsed, including most of the presbytery, and the rebuilding incorporated a beautiful Decorated east window, dating from the very end of the 13th century, and very advanced for its time. In 1450 two sides of the central tower collapsed, requiring a major rebuilding effort that was incomplete at the time of the Dissolution and subsequently abandoned. This is the explanation for the unusual appearance of the western arch at the crossing, with its massive, incomplete Perpendicular column. The new tower was shorter than the original, but was topped by an impressive 120-foot high spire: however, this spire collapsed in 1615 and was not replaced. The dignified pulpitum was completed in the 1470s, very similar to the one at York, and the beautiful quire stalls date from the same period. By 1500 the nave was in a poor state of repair and was refurbished in Perpendicular style in conjunction with the ongoing work on the western column at the crossing, but maintaining the original Norman proportions.

There were some sympathetic repairs and restorations by the Victorians in the 19th century. 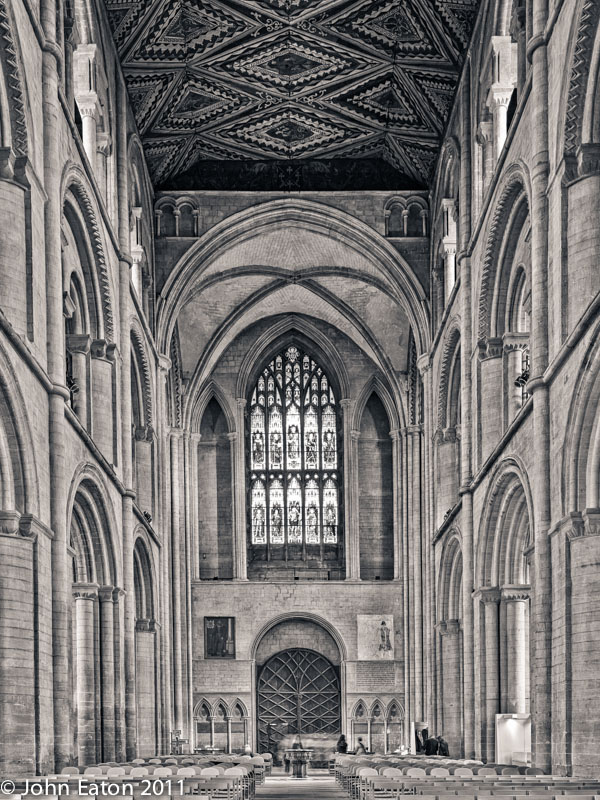