Gloucester was originally a Roman town, but it appears that it declined to almost insignificance for 200+ years after the Romans left at the beginning of the 5th century. In 681, King Osric of Mercia founded St Peter’s Abbey on the site, and in 909 Queen Ethelflaed (daughter of King Alfred) moved the relics of St Oswald to Gloucester. Subsequently, Ethelflaed and her husband were both buried in St Peter’s abbey. In 1058 Bishop Aldred rebuilt the church on a larger scale, and, in 1072 the Norman, Abbot Selo, was appointed to what was then a small and run-down abbey with only two monks. He brought new energy to the establishment and began a new Norman abbey church in 1089: starting as was usual at the east end with crypt, presbytery and ambulatory, then moving west with quire, crossing, transepts and nave. The results of his work can still be seen in the immense, simple pillars of the nave, which was consecrated in 1100, though probably only the east end and the first two bays of the nave were complete at the time.

The early nave roof was of wood and was destroyed by a major fire in 1122. The abbey was not in good financial health so it is unclear as to when repairs were made, but there was clearly a long delay in getting permanent repairs and rebuilding underway. Further calamity befell the church when the south tower of the west front collapsed around 1170, and financially the situation deteriorated further when the monks had to sell silver plate to help ransom King Richard I. Eventually the situation began to improve markedly following the coronation of Henry III in the church in 1216 and new building began. A Lady Chapel was completed in 1227, though it no longer exists, and at last the Early English stone vaulting of the nave was completed by 1242 (though the resulting proportions are less than ideal as the triforium is relatively low).

Throughout the 13th and 14th centuries a succession of abbots engaged in a series of wonderful Decorated and Perpendicular additions to the building so that we now see a sharp contrast on each side of the stone pulpitum (which carries the organ): between the original robust Norman nave on one side and the exuberant Gothic of the quire and presbytery on the other. Despite the poor quality and indifferent foundations of the Norman building, the Gothic work added to and encased much of the original, rather than demolishing and rebuilding, so that the outline of the Norman original is still clear in the floor plan and, as at Norwich, the ambulatory remains complete around the east-end apse. Similar again to Norwich, Gloucester still retains two Norman chapels off the ambulatory.

The rebuilding really took off after Edward II was buried in the Abbey in 1327, as his tomb became a shrine attracting a multitude of pilgrims, generating both a need for an appropriate edifice and the income to provide it. This work resulted in several magnificent examples of Perpendicular architecture: the quire and presbytery, and especially it’s lierne vault; the glorious south transept; and, above all, the immense, beautiful east window -- 72 feet high, 38 feet wide, the same size as a tennis court! -- one of the biggest Gothic windows in the world, and some of the most beautiful medieval glass. It was built in the middle of the 14th century, much of it commemorating the victory at the battle of Crecy in 1346 – the window is built on the foundations of the Norman apse, so is slightly bowed and is actually six feet wider than the quire, so that the two eastern-most bays of the quire are splayed outwards to accommodate it. This majestic window and the Perpendicular presbytery result in the whole east end of the cathedral being infused with light and space, in contrast to the more somber, heavier, darker nave. The new Lady Chapel was built between 1470 and 1490 and is a magnificent example of late Gothic, with walls that are more window than wall and a beautiful vault.

But for myself the real high-spot at Gloucester are the cloisters -- arguably the cloisters at Gloucester are the most beautiful anywhere and the finest and best-preserved in England, with their stunning fan-vaulting. Begun in 1351 they were completed almost 50 years later: the north aisle still features the monk’s lavatorium and the south aisle their study carrels. Unusually, these cloisters are positioned to the north of the nave, rather than the normal more sheltered south.

As it housed the tomb of Edward II, it didn’t suffer too much at the Dissolution (unlike other abbeys in the area), though some statues and decorations were destroyed, as were the monk’s refectory and dormitory. In 1541 the abbey church became the cathedral for a new diocese. It suffered relatively little in the Civil War itself as compared with other locations, but afterwards was neglected and in serious danger of being demolished for its stone until, in 1657, it was deeded to the mayor and burgesses of the town. In the 18th century Bishop Benson spent a great deal of his own money on maintenance so, thankfully, there was little opportunity for the Victorian ‘improvements’ inflicted elsewhere. 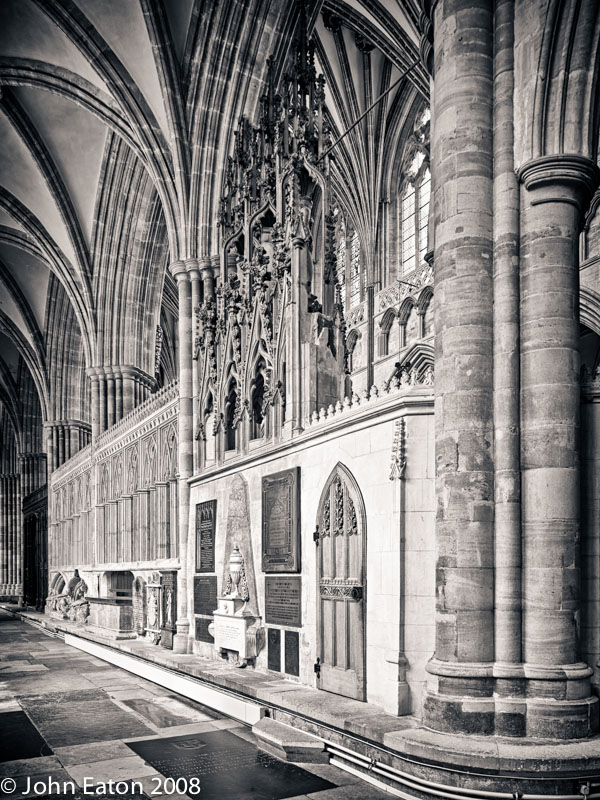