The cathedral at Worcester was founded as by Theodore of Tarsus, Archbishop of Canterbury, in 688, with Bishop Bosel as its first bishop. When St Oswald arrived in 962 he built a new church for the Benedictine monastery next door to the existing church, and eventually the two united to become a single larger and richer establishment. In 1084 the Saxon Bishop Wulstan (who alone among the Saxon prelates retained his position after the conquest, until his death in 1094) demolished both churches and began building a much larger new church (the Danes had helped by sacking Oswald’s church in 1041). Both Oswald and Wulfstan were subsequently canonized, making Worcester a significant place of pilgrimage.

Seriously damaged by fire in 1113, little of Wulftan’s church survives today, other than in the crypt and the striking Chapter House, finished in 1120 and unlike any other at the time – circular inside and 10-sided outside, the precursor to many other such buildings elsewhere. In 1175 the west tower collapsed and required the rebuilding of the west front and the two western-most bays of the nave in a very advanced design for the time. And in 1180 it suffered damage from another fire. In 1218 there was a formal rededication of the church in the presence of Henry III, following the burial of King John in the cathedral in 1216, between the shrines of St Oswald and St Wulfstan (as he had requested in his will).

From 1224 onwards the new Bishop, William of Blois, rebuilt the entire east end in a pure, elegant and serene example of Early English, similar in style to that of Salisbury, the finest part of the building, especially the long windows with their fine shafts of polished Purbeck stone. After the four bays of the quire and presbytery, new east transepts were added, following the pattern at Canterbury, Lincoln and Salisbury, followed by a retrochoir and small Lady Chapel, only extending one bay beyond the east wall. The quire still possesses several of its original misericords from the second half of the 14th century (though some are Victorian replacements). The increased length of the east end resulted in the central tower now being positioned almost exactly half-way along the length of the building.

Work proceeded on the nave piecemeal by a succession of architects, being built and rebuilt over a period of 200 years from 1170 to 1370, resulting in an eclectic mixture of styles from bay to bay. This culminated with the completion of the very fine Perpendicular central tower (originally with a tall spire) in 1374, and the vaulting of the nave in 1377. The cloisters were completed in the 15th century and the final addition was Prince Arthur’s Chantry Chapel on the south side of the south quire aisle, completed in 1504 – Arthur was Henry VIII’s elder brother and the presence of his chapel here likely spared Worcester from any depravations during the Dissolution.

Like many other cathedrals, Worcester suffered significant damage on several separate occasions during the Civil War, especially after the Battle of Worcester in 1651 when thousands of prisoners were held in the cathedral, plundering and stripping the interior. By the time of the Restoration it was in a very poor state, both structurally and in it’s resources to function as a church. There were several efforts to restore parts of the cathedral from the end of the 17th century through to the 19th century, when the Victorians undertook the largest restoration campaign. In addition, Worcester has suffered like all the other sandstone cathedrals from the friable nature of its construction material and the repairs, rebuilding and ‘improvements’ that have resulted. It is nevertheless an impressive and in many ways beautiful building, but the 18th century patching and 19th century faux-gothic restoration have taken their toll, losing a lot of its true medieval character. Today’s west front is almost entirely a Victorian restoration, as is much of the facing stonework on the exterior of the building. 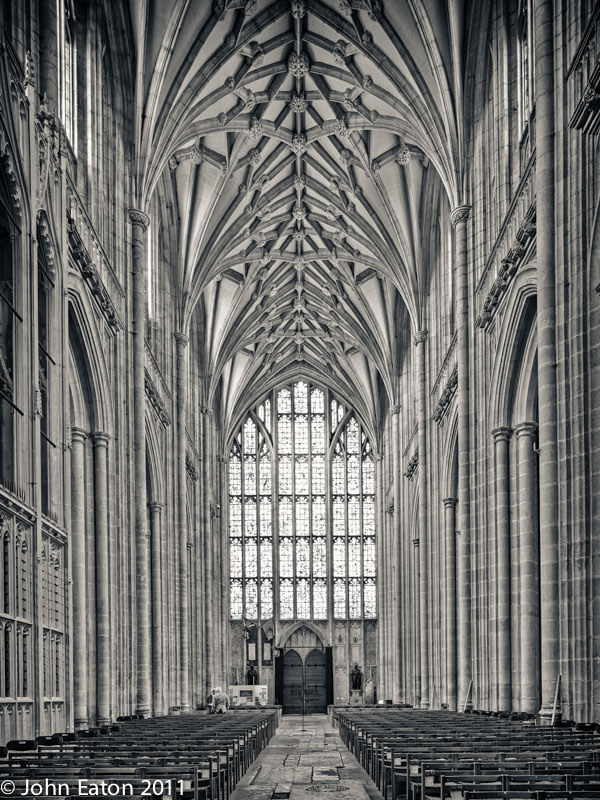