In 597 St Augustine, sent by Pope Gregory to re-convert the pagan Anglo Saxons to Christianity, baptized King Ethelbert of Kent in Canterbury, marking the foundation of the diocese and it’s bishop as primate of England. The present cathedral is on the site of the church originally founded by St. Augustine – his church, the church of the Benedictine monastery, was subsequently substantially enlarged, especially in the 10th century, but retained the original as its core.

Following the Norman conquest this original foundation was totally destroyed in 1067 yet, as elsewhere, the Normans made rapid plans for a new building. The new building was created by Archbishop LanFranc, roughly modeled as a larger copy of the abbey at Caen (the stone was sourced from Caen), started in 1070 and completed in 1077 (the short construction time suggests that it was an urgent, but probably unambitious endeavor). None of LaFranc’s church remains, but the present nave and major transepts stand on his foundations. Soon, as in most other Norman foundations, it was determined that this space was inadequate for the rapidly growing monastery, so beginning in 1093 it was significantly expanded and enhanced.

Principally executed by Archbishop Anslem, the major focus was an immense expansion to the east of the crossing to appropriately accommodate all the new monks – an enormous new quire (itself the size of a small cathedral), new north-east and south-east transepts, an ambulatory around the quire, and new chapels at the extreme east end of the apse. Under the new quire a magnificent crypt was constructed and, to accommodate it, the floor was raised significantly above that of the nave, adding to the majesty of the new building. This great endeavor was completed and consecrated in 1130. It set a pattern common in many other cathedral churches that served as the church for a monastery – rebuilding and extensions to the east of the crossing, finely and richly decorated for the monks and clergy, while maintaining a usually plainer and more austere nave for the laity

However in 1174, only 44 years after the completion of this work, a fire in the city adjacent to the cathedral combined with a strong wind caused the roof of the new east end to catch fire, resulting in the total destruction of the new quire and east end. The original intent was to rebuild what had been destroyed, but the chosen French master builder and architect, William of Sens, persuaded the monks to explore the potential of the ‘new architecture’ – pointed arches and gothic. William was faced with major architectural challenges: the foundations of the quire walls and the crypt remained and had to be incorporated into the new building, dictating the positioning of the columns and the floor-line, while continuity of the nave dictated the roof-line. Nevertheless, he was able to increase the height of the quire by the full height of a new clerestory while maintaining piers of the same girth as before, thus reinforcing the sense of lightness and spaciousness.

The result is a masterpiece of Early English architecture – progressing from west to east the floor level rises, the materials and decoration get finer and richer and the lighting increases. He also introduced one of the mainstays of English gothic architecture: the use of polished dark Purbeck marble shafts on the columns. Unfortunately, William of Sens suffered a serious injury from a fall from the scaffolding before the work was completed and it was left to his successor, William of England, to complete the final stages – the Trinity Chapel, with another rise in floor level from the quire, the narrowing of the walls from the altar into the chapel, the small circular chapel at the extreme east end, the Corona, and the double clerestory windows for greater light. The Trinity Chapel and Corona were to house the relics and shrine of St. Thomas a Becket, which was of great importance to the church as Canterbury had become a major pilgrimage destination following his murder in 1170 and canonization in 1172. Sens masterpiece was completed in 1184, only 10 years after work started, a major accomplishment for the time.

This marriage of a plain, wood-roofed nave and splendid Early English Gothic stonework quire co-existed for the next 200 years – but, over time, the desire and need to replace the nave with something more appropriate to the primary church in England grew steadily, especially after York rebuilt it’s nave in 1369. Finally, in 1378 the old nave was demolished and work began on what became one of the greatest examples of Perpendicular architecture, the beautifully proportioned nave as we know it today. It is believed that this rebuilding was designed and directed by Henry Yevel, who had recently completed a similar effort at Westminster Abbey – at Canterbury his use of clustered column-shafts gives a breath-taking impression of height and lightness, emphasized by the tall clerestory lancet windows. The nave itself was completed early in the 15th century, but work continued with the stone pulpitum, the great central tower (Bell Harry Tower) with it’s gorgeous fan-vaulting over the crossing, and the bracing stonework between the crossing pillars required to strengthen them to take the enormous weight of the new tower – all this was finally complete by 1503.

Because of its importance as the seat of the Primate of England, Canterbury almost always had the resources to adequately maintain its fabric so didn’t suffer from the depravations of many other cathedrals, nor from the ‘improvements’ of the Victorians. Today it still sits in splendor at the center of a medieval city within its own spacious precincts. 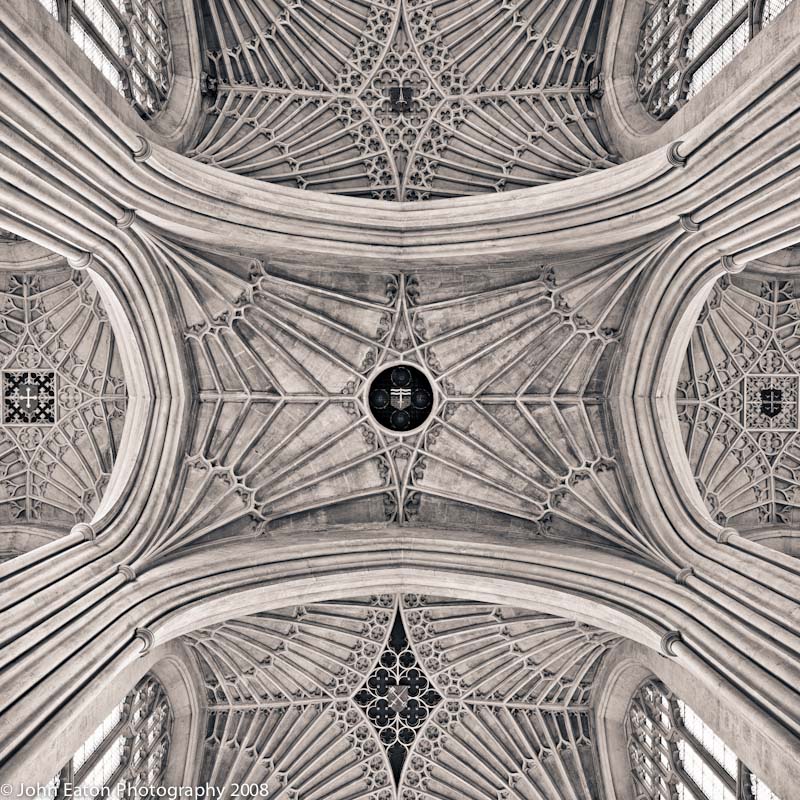