The cathedral stands on a low hill, on the Isle of Ely, less than 100 feet above sea-level but, because of the flatness of the surrounding fens, can be seen for miles around and dominates the city (and in medieval times when the fens frequently flooded, it was said to ‘float’ on the water like a great ship). Ely was originally founded as a monastery in 673 by St. Etheldreda, an Anglo-Saxon queen, who fled there from her husband, the King of Northumbria, and who died at Ely, allegedly a virgin -- her shrine is in the cathedral and she was one of the most important and revered medieval English saints. The abbey was destroyed by the Vikings in 870 (along with Peterborough), and re-founded by Athelwold, Bishop of Winchester, as a Benedictine monastery in 970.

Serious Norman rebuilding began in 1083 by Abbot Simeon (brother of Abbot Walkelin at Winchester), once the local resistance to the Normans by Hereward the Wake and his men had finally been suppressed. Unlike some other churches, the Saxon church hadn’t been damaged by the Normans, so rebuilding was more to keep up with others than a basic need. The east end was completed in 1106 and most of the nave was finished by 1140. This majestic nave is one of the finest Norman structures in England, and still retains its classical proportions in the ratios of the heights – 6:5:4 for the arcade, triforium and clerestory respectively (though the clerestory windows were usefully enlarged as a part of Gothic rebuilding). The wooden nave ceiling was restored by the Victorians and repainted by them.

The west front, with it’s two wing-like transepts and great towers, was completed toward the end of the 12th century, though the north-west transept tower collapsed in the 15th century and wasn’t rebuilt, resulting the somewhat unbalanced west façade that we see today. At the beginning of the 13th century the Galilee Porch was added to the west front (in Early English gothic) as a venue where liturgical processions could assemble prior to entering the nave – originally a two-story building, it was converted into a vaulted space in the 18th century. The east end of the cathedral was, as elsewhere, deemed to be too small and the east end apse was demolished around 1234. The new presbytery was finished around 1252 and is an exuberant example of Early English Gothic executed in Barnack limestone (from quarries owned by Peterborough cathedral), with shafts, of course, in Purbeck marble, and a stone vault.

In 1321 work began on the Lady Chapel, under the direction of Alan de Walsingham: an almost freestanding, massive rectangular building, which on completion was breathtaking with its wonderful decorated carvings, 147 life-size statues, and beautiful glass, unfortunately little of which survives today. In 1322 the Norman central tower collapsed (perhaps because of the foundation work for the Lady Chapel), bringing down with it the first three bays of the quire. De Walsingham (assisted by the King’s carpenter, William Hurley) replaced it with the unique and most magnificent feature of Ely, the octagon tower, spanning the full width of the nave (including the aisles), with wooden rib-vaulting supporting the exquisite lantern, in all 450 tons of solid oak (the entire country had to be scoured for the required beams – 63 feet long and 3 feet square!). The Lantern itself was completed in 1342, along with the re-built quire and the Lady Chapel, though the painted decorations below the lantern windows are Victorian.

Ely together with Durham and it’s two local neighbors, Peterborough and Norwich, are the best preserved and most magnificent examples of Norman cathedral architecture in England, though the rebuilding of the presbytery and addition of the Lady Chapel at Ely resulted in a Gothic ‘square’ east end, in contrast to the surviving Norman curved apses at Peterborough and Norwich (nevertheless, the outline of the original Norman apse east end can still be seen on the attached floor plan).

At the Dissolution the cloister was demolished as were most of the monastic buildings, and in 1541 Bishop Goodrich issued the order for all images, ornaments, monuments and shrines to be demolished – the use of Lady Chapel as a parish church likely ensured its survival. Restoration efforts in the 18th and 19th centuries were mixed – in the 18th the quire stalls were moved to the east end, but in the 19th Scott moved them back to their original position, installed the screen, and restored the lantern. 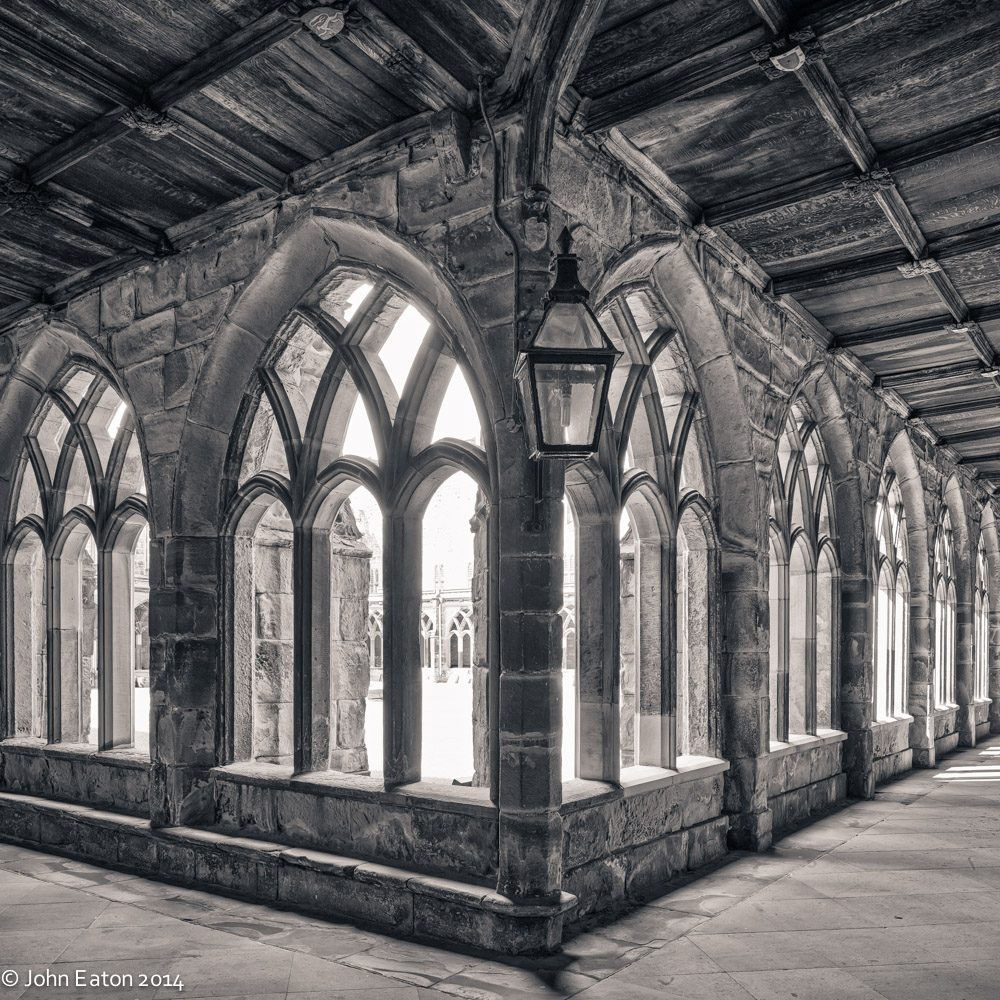