Christianity formally arrived in East Anglia in 630 when Bisop Felix established his see at Dunwich, on the coast (Dunwich no longer exists because of coastal erosion). In 660 the diocese was sub-divided with seats at Dunwich and Elmham until about 990 when it was unified in a single see at Elmham. In 1075 the see was moved to Thetford and, finally, in 1094 to Norwich.

Norwich, as we see it today, except for Durham, is one the most complete and ‘pure’ Norman abbey churches in England, with a floor-plan little changed from when it was built, though with several beautiful Perpendicular additions in the 15th century. Construction was begun in 1096 by Bishop de Losinga starting, as usual, at the east end, and at the time of his death in 1119 the east end, transepts and three eastern bays of the nave were already complete. Most of the remaining work was completed by 1145, using stone shipped in from Caen in Normandy as well as the Barnack stone used at Ely and Peterborough.

The nave is a wonderful example of Norman architecture, very long, with massive, simple piers, and a relatively low nave arcade but high triforium (the triforium is the same height as the arcade, a very unusual arrangement), providing lots of light into the nave. And the aisles continue right round the choir and presbytery in an ambulatory (which was uncommon in England at the time, and the only other remaining example is at Gloucester) with the original Norman apse east end and two remaining Norman chapels (each with their own apse end). Because of the great length of the nave and ‘shortness’ of the east end, the choir screen and quire are located to the west of the crossing. Unlike most other Norman cathedrals, the east end was never rebuilt and retains its original Norman layout, even though relatively small (one possible reason for this is that Norwich never had to accommodate the relics and shrine of a saint and the associated pilgrims).

In about 1170 a fire destroyed the Lady Chapel in the apse and Bishop Suffield built new one on a much more lavish scale in Early English style to the east, beyond the Norman apse. However, this fell into dis-repair after the Dissolution and was demolished in the second half of the 16th century (there is now a much smaller chapel of St Saviour on the site, which was completed in 1930 which, obviously, is not shown on the floor plan, dated 1891).

The later Perpendicular additions were made in the second half of the 14th and first half of the 15th centuries. The stone tower is the highest Norman tower in England and second only to that of Salisbury in overall height. The tower originally had a wooden spire, but this was blown down in 1362 in a hurricane, damaging the presbytery roof; a new spire was built, but this was struck by lightning in 1463, and the resulting fire destroyed both it and the roofs.

It was then decided to replace all the roofs with magnificent lierne stone vaults: the nave and choir vault was completed by 1470. New, delicate clerestory windows (twice the height of their predecessors) and beautiful fan vaulting was completed in the presbytery by 1480, making it a wonderfully tall (83 feet) and light space. Finally, the present spire, with the new flying buttresses superimposed over the original Norman building (a wonderful piece of Gothic engineering), and the vaulting of the transepts was completed by 1510. The great west window was built between 1446 and 1472, together with a new perpendicular west door.

The cloisters are the largest intact monastic cloisters in England, rebuilt from 1272 onwards over the next 150 years after riots destroyed the Norman original (sparked by townsfolk objecting to taxes and levies by the bishop!) and contain some very fine stone carving in the cloister bosses.

Norwich only suffered lightly in the Civil War and as the see to a large, rich agricultural diocese, was maintained appropriately from the 17th century onwards and thus had no need of the major Victorian restorations inflicted elsewhere. 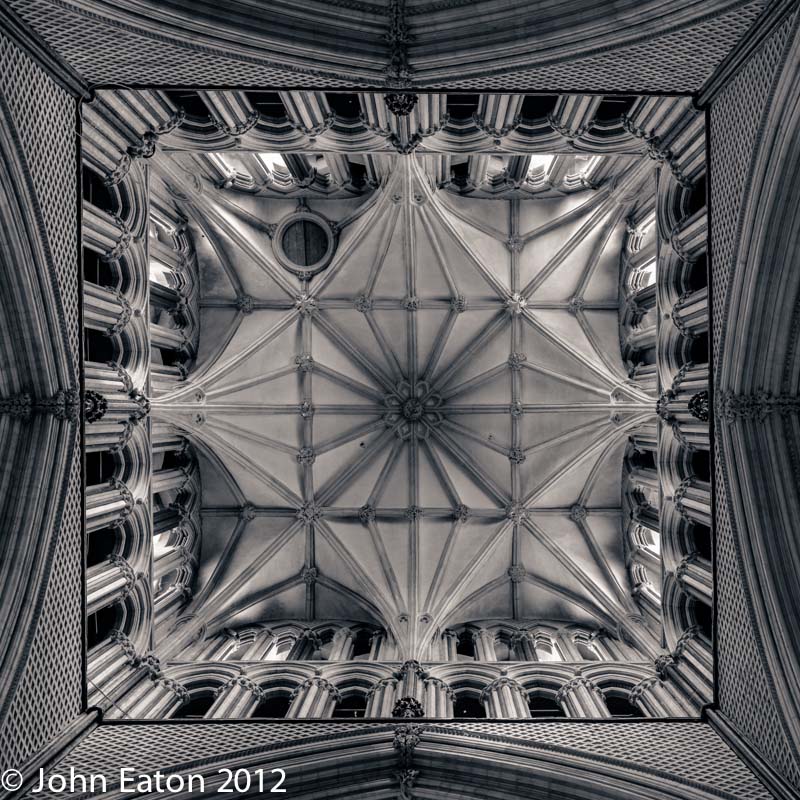