St Albans is the oldest place of continuous Christian worship in England, centered around the shrine to St Alban, the first English Christian martyr. Alban was a citizen of Verulamium, the Roman city that lay in the valley below the present city of St Albans. Alban sheltered a Christian priest, Saint Amphibalus, from persecution and, refusing to renounce his faith, was put to death by the Romans in 209. A Saxon church was built around the tomb of St Alban in the 4th century and became a major pilgrimage destination. A larger church was built in 793 for the Benedictines (allegedly by King Offa of Mercia) and St Albans became the leading Benedictine foundation in England up until the Dissolution – the Abbot of St Albans was made premier Abbot of England in 1154.

The marauding Danes sacked the Abbey at the end of the 9th century and in 1005 the monks began a major effort to build a new abbey church higher up the hill from the old church and the ruins of Verulamium (one of the largest and most important Roman cities in England). They were also given permission to use the old bricks from the ruins of Verulamium to construct their new church, which accounts for the very distinctive old brick and flint exterior of the present cathedral. Today we see a 1000-year-old cathedral made from bricks twice that age!

Renewed raids by the Vikings stalled this effort and this abbey church was never completed. In 1077, the new Norman Abbot, Paul of Caen, (nephew of Lanfranc at Canterbury), began a rebuilding of the abbey church. Paul’s new church was immense – a third longer than the then new cathedral at Canterbury (completed in 1077 as the work at St Albans started) and the nave, at 350 feet, is the second longest in England. The east end and transepts were complete by 1088 and the nave by about 1115, when dedication of the building occurred. The core structures of the Norman arches at the crossing, the transepts, first three bays of the quire and eastern part of the nave are all 11th century Norman work – and in the south transept remains of old Saxon brickwork can be seen in the triforium shafts.

The architecture is very plain and heavy, tough and rather austere, relieved only by the decorative patterning in the arch molds and the 13th century frescos on several of the pillar walls. The immense 11th century central tower is the only central crossing tower of this age still standing in England – originally it did have a spire, but this was taken down in 1832. Given the fate of the other large Norman towers built at this time, this is a testament to Paul’s insistence on excavating deep foundations down to bed-rock.

In the nave the three western-most bays on the north side and four on the south side were added in Early English style by Abbot John Cella. However, the finances of the church were not good at this time and in 1197 the work was suspended -- it was finally completed in 1230s. Abbot Cella’s original plans envisaged two large towers at the west end (like at Wells), but these were never built – if they had been they would have improved the exterior perspective. Then in 1323 several of the remaining Norman columns on the south side of the nave collapsed into an old Saxon structure so, as a result, bays five through nine on the south side were rebuilt to roughly match the Early English style of the western-most bays. Thus the nave today has a very clear delineation between the original Norman work to the north and east and the Early English Gothic to the south and west.

Late in the 13th century cracks appeared in the walls of the Norman presbytery, which initiated the rebuilding of the east end beyond the three original Norman bays. The rebuilt presbytery, with a beautiful ribbed wooden vault, was complete by about 1290, followed by new Decorated-style retrochoir and Lady Chapel by 1327. In 1308 the shrine of St Alban was installed in the new Saints Chapel, between the reredos of the altar and the new retrochoir. It is flanked by a magnificent wooden watching-loft on the north side of the chapel. The final additions were a fine stone pulpitum in 1360 and the magnificent reredos behind the altar, similar to the one at Winchester, installed in 1484.

Prior to the Dissolution the abbey had fallen into slow decay and at the Dissolution the building was looted and desecrated. After the Dissolution it fell into a serious state of neglect and disrepair, as it was much too big for the townspeople to maintain as a parish church. Much of the church was put to other uses – a public passageway was driven through the retrochoir and for 200 years the Lady Chapel was taken over as a school. During the Civil War the building was used to house prisoners of war and suffered further serious damage. In the middle of the 18th century the building came very close to being totally demolished. Eventually it was rescued and restored by the Victorians, especially by Cottingham and Scott (referred to as ‘the savior of the abbey’) – George Gilbert Scott died in the middle of this effort and was succeeded in this work by his son, John Oldrid Scott. Unfortunately, work had to be stopped for lack of funds in 1878: this resulted in a new ‘benefactor’, Lord Grimethorpe, who used his own funds to execute his own design (he was an amateur architect) for a rebuilding of the west front and transept faces in rather poor taste. St Albans finally became a cathedral in 1878. 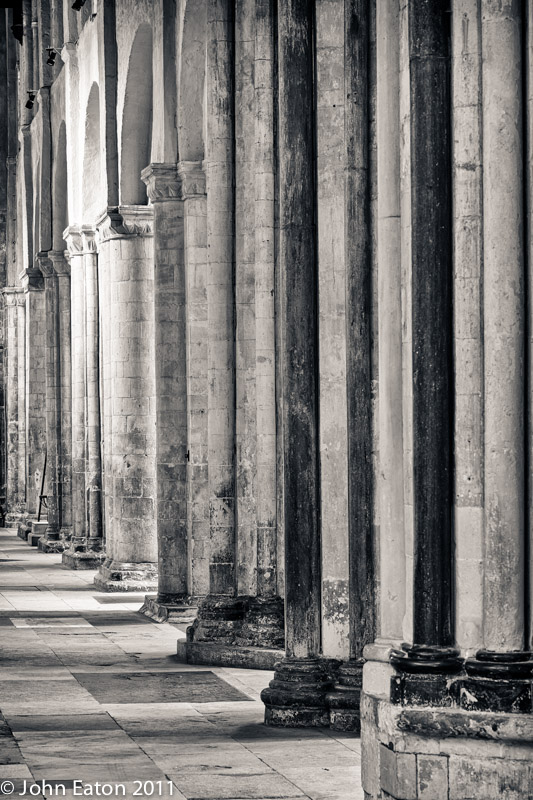