Four great medieval abbeys were established in the Scottish Borders — Dryburgh, Jedburgh, Keso and Melrose — today remains exist of all four, but it is only at Jedburgh and Melrose that significant parts of the medieval structure are still in place.

The first church at Jedburgh was built in the 9th century and a Priory of Augustine canons was founded there in 1118 by Prince David of Scotland: subsequently, as King David I, he raised it to the status of an Abbey in the mid-12th century. King David wanted his new church to demonstrate his authority and power over the Borders region and, although most of the other abbey buildings are long lost, the church itself still stands in majesty despite the ravages of time and the pillaging by the English.

The quire and nave were completed in the 13th century, the quire the original Norman design, the nave in later gothic, before the wedding of King Alexander III of Scotland at the church in 1285. However, in 1296 the Abbot swore fealty to King Edward I of England at Berwick, but after the defeat of the English at Stirling by William Wallace in 1297, the abbey was pillaged and wrecked by the retreating English in retribution. In the 14th century Robert the Bruce patronized the abbey which grew and prospered — but in 1346 after the English defeated the Scots, the church was again desecrated — and again in 1410, 1416, and 1464 — and in 1523 the entire town and abbey were set ablaze by the English, then sacked again in 1544. Finally, the abbey was closed in 1560 at the time of the Scottish Reformation.

Despite the attentions of the marauding English, the abbey church is remarkably well-preserved and it’s scale and beauty still very visible, from the Norman east end to the long, graceful gothic nave with it’s elegant arcades, to the strong west front.

In addition to Jedburgh, King David I also founded the Cistercian monastery at Melrose in 1136: this was the first Cistercian monastery in Scotland — the monks came from Rievaux abbey in Yorkshire — and it became the chief house of the order until the Reformation. There had been an earlier abbey about 2 miles away, Old Melrose, founded by St Aidan of Lindisfarne in the 7th century: St Cuthbert was Prior at Old Melrose before he moved to Lindisfarne.

As was typical in abbey churches, building commenced with the east end, which was completed by 1146, then proceeded westwards down the nave — the entire church was completed by the end of the 12th century. However, as with Jedburgh, Melrose also suffered from the unwelcome attentions of the English. In 1300 and 1307 it was attacked by Edward I and in 1322 much of the abbey was destroyed by the army of Edward II: the abbey was rebuilt on the orders of Robert the Bruce (the king’s heart was later buried in the abbey, the rest of his body at Dunfermline). In 1385 it was burnt down by Richard II, which necessitated a complete rebuilding of the abbey over the next 100 years and it is the remains of this building that we largely see today. In 1544 the abbey was again seriously damaged by English armies and was never fully repaired: it’s last abbot died in 1559 and it’s last monk in 1590. In 1610 a part of the abbey church was converted into a parish church for the town: it was used in this way until 1810, when a new parish church was constructed in the town.

Today the beautiful east window and it’s vaulting, the south transept, and four bays of the nave and south aisle are testament to the grace and elegance of the 14th century gothic architecture.

The original priory at Dunfermline was founded by King Malcolm III and Queen Margaret (later canonized as St Margaret and buried here) in the 11th century on the site where they were married. Their son, King David I, raised the priory to an abbey in 1128 and built a magnificent new Romanesque church on the site — the great nave of David’s abbey church is still largely complete and what we see today. The massive pillars of the nave closely resemble those at Durham in their chevron carvings and it is believed that David brought the masons from Durham to execute his masterpiece. As well as St Margaret, David I and Robert the Bruce are buried at Dunfermline and the abbey was richly endowed by both David and Robert.

In 1303 Edward I of England’s army burned most of the abbey buildings — Robert the Bruce financed the rebuilding effort and one of his impressive accomplishments was a new building for the monk’s refectory, a large building with a elaborate facade. At the Reformation in 1560 the abbey church was sacked; the nave was repaired in 1570 and converted into a parish church for the town, while the quire was allowed to deteriorate and eventually collapse. A new parish church for the town was built on the site of the old quire between 1818 and 1821, directly attached to the original nave of the abbey church which now serves as a vestibule for the new parish church.

The abbey church in Dunfermline is an excellent and exuberant example of Romanesque architecture, from the massive carved pillars of the nave to the beautiful decorated doorway in the west front. 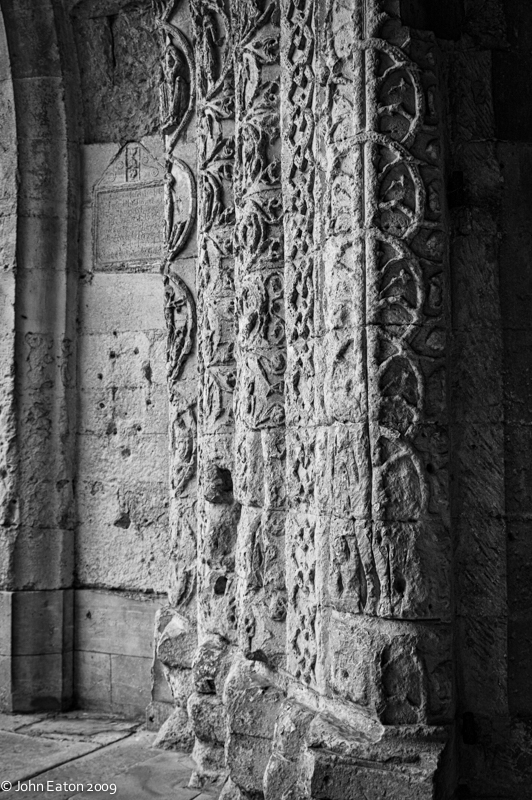