Lincoln and Durham, among the finest of English cathedrals, occupy magnificent positions, perched on a stone outcrop next to the castle, towering above the roofs of their old cities, visible for miles around looking much as they have done for centuries. A settlement since prehistoric times, Lincoln was a major fortified city in Roman times and was converted to Christianity by Bishop Paulinus of York in about 628. After the Danes invaded in the 9th century, the see was moved to the southern extremity of the diocese at Dorchester-on-Thames and wasn’t restored to Lincoln until after the Conquest (the then Lincoln diocese covered an immense area, stretching from the Thames to the Humber, including parts of nine counties and more than 1700 parishes!).

In 1068 William the Conqueror built a new castle at Lincoln and in 1072 came the decision that all sees should be located at fortified towns, so William’s new Bishop at Lincoln, Remigus, moved the see back from Dorchester and immediately began building a new cathedral. His new cathedral was a typically solid Norman structure, consecrated in 1092 (Remigus died two days before the consecration), with a massive castle-like west front facing the actual castle, the core of which survives today. In 1141, the roof was destroyed by fire and the ambitious and powerful Bishop Alexander used the opportunity to rebuild and expand the cathedral, and the Norman west doorways date from this period.

On April 15, 1185, an earthquake struck Lincoln (and was also felt over much of England) in which the church was ‘cleft from top to bottom’. Immediately following, in 1186, a new Bishop was appointed, Bishop Hugh, Lincoln’s most famous bishop, who began the construction of a magnificent new Gothic cathedral in 1192. Although Hugh died in 1200 before his masterpiece was complete, his work continued throughout the 13th century, largely under the direction of Bishop Grosseste, and forms a splendid illustration of the progress of church architecture through that century. Hugh was held in such reverence that his funeral was in effect a State affair – the Kings of both England and Scotland were pall-bearers – and he was canonized in 1220.

By the time of his funeral his new quire (St Hugh’s quire) was probably finished as an exuberant example of Early English Gothic. Following his death work progressed steadily, first with the transepts, then with rebuilding the nave, all with rich elaboration, and encompassing the latest architectural and engineering advances of pointed arches, flying buttresses and ribbed vaulting. The work in the transepts included two stunning rose windows, among the first of their type in England – known as Bishop’s Eye in the south transept and Dean’s Eye in the north. Additionally, Lincoln had created what was to become a significant element in English church architecture in the 10-sided Chapter House – launching the polygonal design vaulted from a single central pier. Lincoln was all the time pushing the envelope of what Early English Gothic was capable of, creating an architectural masterpiece in amazing contrast with the heavy Norman work of only 50 years previous. By around 1235 the work was largely complete, except for the west front, revealing a magnificent Gothic space of spaciousness, scale and dignity.

However, in 1237 the main tower collapsed so building started again, and in 1255 this expanded to encompass the extension of Hugh’s Quire to the east. This resulted in the Angel Quire, encompassing the presbytery, retrochoir and Lady Chapel into a single architectural element – tall, elegant, Purbeck shafts supporting a decorated vault and culminating in an east window of amazing size (59 feet high) and delicacy for the period. This work was completed in 1280 when a dedication ceremony was held in the presence of King Edward and Queen Eleanor, the Archbishop of Canterbury, and many other dignitaries. This formed a superb conclusion to the Early English Gothic architecture of the 13th century, wonderfully rich and detailed, and perfectly proportioned. Final finishing touches to the building were made in the 14th century: notably, in 1307-11 raising the height of the central tower (and the western towers were raised in the 15th century), the carved stone work decorating the pulpitum, and the quire stalls, completed in 1365-70, probably the best in the country after those at Chester.

At the Dissolution the church suffered some desecration and damage and, in particular, St Hugh’s shrine was destroyed and its treasures removed to the Tower of London under Henry VIII’s direct orders. During the Civil War the city was captured and pillaged by Cromwell’s Commonwealth troops and the church suffered serious internal damage, in particular, most of the medieval glass and ornamentation was destroyed. The building was largely untouched by the Victorian restorers – Scott was absent – and the only significant work was the reinforcing of the west towers and restoration of the north transept and Chapter House. 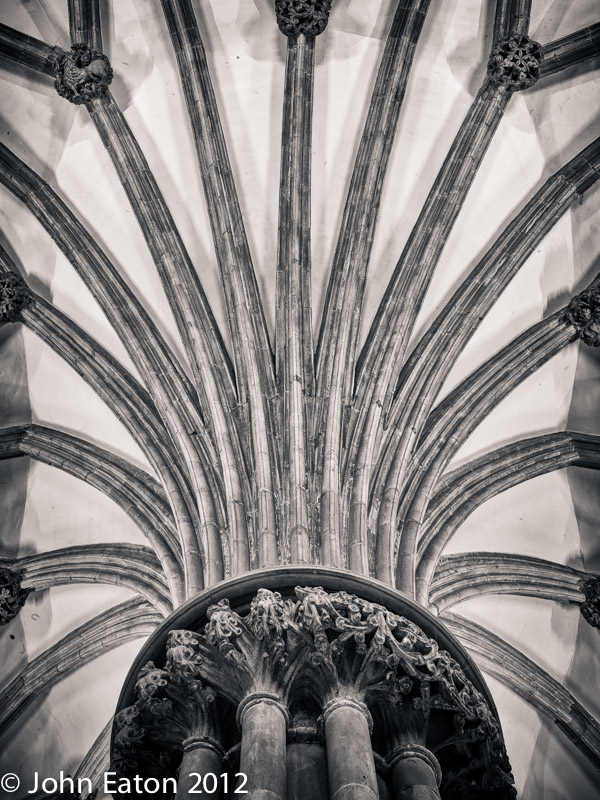