Tewkesbury Abbey, originally a Benedictine monastery, is the second largest parish church in the country (larger than many cathedrals) and is one of the finest examples of Norman architecture.

The first Christian site was established here in the mid-7th century and in the 10th century became a Benedictine priory, linked to Cranbourne Abbey in Dorset. Following the Conquest, William gave the manor of Tewkesbury to his cousin, Robert Fitzhamon, who with the Abbot of Cranbourne founded the present abbey in 1092. Construction of the new abbey church started in 1102 using familiar stone from Caen, floated up the Severn: the quire was consecrated in 1121 and the tower, nave (with a wooden roof), and the rest of the church was completed by about 1150. This church is a beautiful and magnificent example of Norman architecture, with “probably the largest and finest Romanesque tower in England” (Pevsner), and is largely intact today. In the middle ages it became one of the richest abbeys in the country and the only major structural changes were made in the first half of the 14th century when the east end and apse were remodeled in Decorated gothic, with the addition of chantry chapels, and the wooden nave roof was replaced with a stone lierne vault.

At the time of the Dissolution, the monastic buildings at Tewkesbury were destroyed in 1539 — however, the abbey church was saved when the townspeople claimed it as their parish church and bought the property from Henry VIII for £453, which role it has fulfilled ever since. Subsequent changes have been minor: in 1559 the wooden spire of the tower collapsed and was never replaced; from 1875-9 Sir George Gilbert Scott undertook necessary renovations and repairs; and additional sympathetic restoration and repairs took place more recently. The result is that today we can enjoy a stunning original example of Norman church architecture.

Ecclesiastical buildings at Pershore have had a troubled history ever since it’s original foundation. The original Saxon minster at Pershore appears to have been founded in the 7th century but had an uncertain existence until it was re-founded as a Benedictine monastery in the 10th century. However, this church burnt down at least once during the 11th century and in mid-century it’s lands were appropriated to found Westminster abbey. Following the Conquest a Norman abbey was built at the beginning of the 12th century and the south transept and tower piers of this church remain today. A fire in the 12th century destroyed the quire, resulting in the building of an Early English quire in 1239. In 1288 another fire brought down part of the tower, destroying the quire vault: this resulted in a Decorated gothic lierne vault and tower being rebuilt by the early 14th century.

At the Dissolution the abbey and monastic buildings were largely destroyed in 1540 — only the quire survived, bought by the parishioners for £400 to be their parish church. However, structural problems continued: in 1686 the north transept fell down and a buttress was added to support the tower; in the mid-19th century the south-east transept was rebuilt; early in the 20th century two western buttresses were added; and in the 1990’s a major restoration effort took place, focused on the south transept, roofs, tower, and a new stone floor.

Malmesbury abbey was founded by Aldhelm around 676 as a Benedictine monastery. It became an important seat of learning and by the 11th century contained the second-largest library in Europe. Following the Conquest the Normans built a new abbey church which was completed by about 1180. During the 13th and 14th centuries this church was rebuilt and expanded, including the addition of a large spire on top of the tower, making it the tallest spire in England at 431 feet (taller than that at Salisbury). However, disaster struck when the spire and tower collapsed in a storm around 1500, destroying much of the nave and transept.

At the Dissolution in 1539 what was left of the building, together with it’s 23,000 acres of land, was sold to William Stumpe, who used the abbey buildings for his weaving business and gave the church to the parishioners for use as their parish church. Further calamity occurred soon after in 1550 when the west tower collapsed, destroying the three western bays of the nave. As a result of the destruction from these two collapses, only about a third of the original nave now remains in use as the parish church, blanked off with a simple large stone wall from the ruins of the rest of the church. 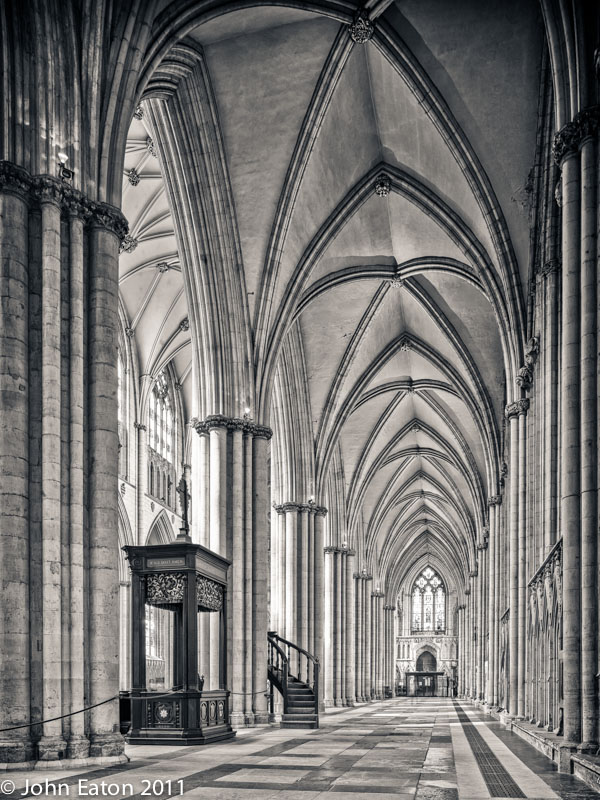