Chester was an important Roman city and stronghold in England, sited on a low sandstone hill at the first place at which the river Dee could be forded, and it is possible that there may have been Christian basilica on the site of the present cathedral in the Roman era. An early Saxon church dedicated to St Werburg (a Mercian princess and nun) was built on the site and, in 907, St Werburg’s shrine was placed in the church. This church was expanded by Leofric, Earl of Mercia, in the middle of the 11th century, but was demolished in 1090 after the Conquest to make way for the construction of a new Benedictine monastery, begun in 1092 by Hugh Lupus, Earl of Chester (and nephew of William the Conqueror), with the help of St. Anselm.

All that remains of this Norman church today is the north-west tower, the north transept and some parts of the monastery buildings adjoining the cloisters. There was already a cathedral church in Chester, St Johns, located outside of the city walls, to which the see had been transferred from Lichfield in 1075 – only to be moved back to be shared by Lichfield and Coventry at the end of the 11th century.

The abbey church fitted into the north-east quadrant of the ancient Roman walled city, very much an intimate part of the city, but constrained in space for expansion. Because of this, when it came time to expand the church in the 13th century the only way to go was east and south – the buildings of the city itself were immediately to the west and other abbey buildings to the north. The expansion began with the Early English Gothic remodeling of the quire, and the addition of the rectangular Chapter House and Lady Chapel (containing St Werburg’s shrine) – the Lady Chapel vault is the only one of stone in the cathedral.

This was followed at the beginning of the 14th century by the ‘acquisition’ of St Oswald’s church – this lay to the immediate south of the abbey church, so the monks built the parishioners a new church outside of the walls and incorporated St Oswalds into the abbey church as what we see now as the very large south transept. Work then moved to the gothic reconstruction (in Perpendicular style) of the central tower (completed by 1493) and of the nave – interrupted on several occasions, the work on the nave began on the south side at the beginning of the 15th century, but it was almost a 100 years later before the north side was completed – the nave was finally completed by 1537. The nave ceiling is timber and a result of the Victorian restoration.

The crowning glory at Chester are the choir stalls, installed originally in the 1380s (and subsequently moved on several occasions), they are probably the greatest example of such medieval carving in the country, especially the misericords. As with many other churches, the original stone pulpitum has been removed leaving the return stalls and entrance canopy as the boundary with the nave.

The Dissolution of the abbey in Chester in 1538 was peaceful and gentlemanly, nothing was desecrated or destroyed, and in 1541 Henry VIII raised the abbey church to be one of his few new cathedrals. As a result, the monk’s abbey school became a separate school for the city, named appropriately enough, The King’s School – similar situations at other abbeys resulted in King’s Schools being founded in 1540-42 in several other English cathedral cities. The King’s School at Chester occupied premises within the cathedral precincts in the center of the city from its founding in 1541 until 1960, when it relocated to a greenfield new site – I was lucky enough to be a pupil at the School from 1953-60 ?.

As with the other red sandstone churches (Carlisle, Hereford, Lichfield and Worcester), Chester has suffered greatly over the years from the softness and friable nature of this material, such that neglect, especially after the Dissolution, caused major deterioration, and repair and restoration had to be undertaken frequently to maintain the fabric, an opportunity that was taken to excess by Victorian ‘improvers’ at all of these cathedrals. By the middle of the 19th century the building was described as a ‘mouldering sandstone cliff’ (George Gilbert Scott): subsequently there was a lot of Victorian restoration, rebuilding and ‘improvement’ such that little original stonework now remains, especially on the exterior. 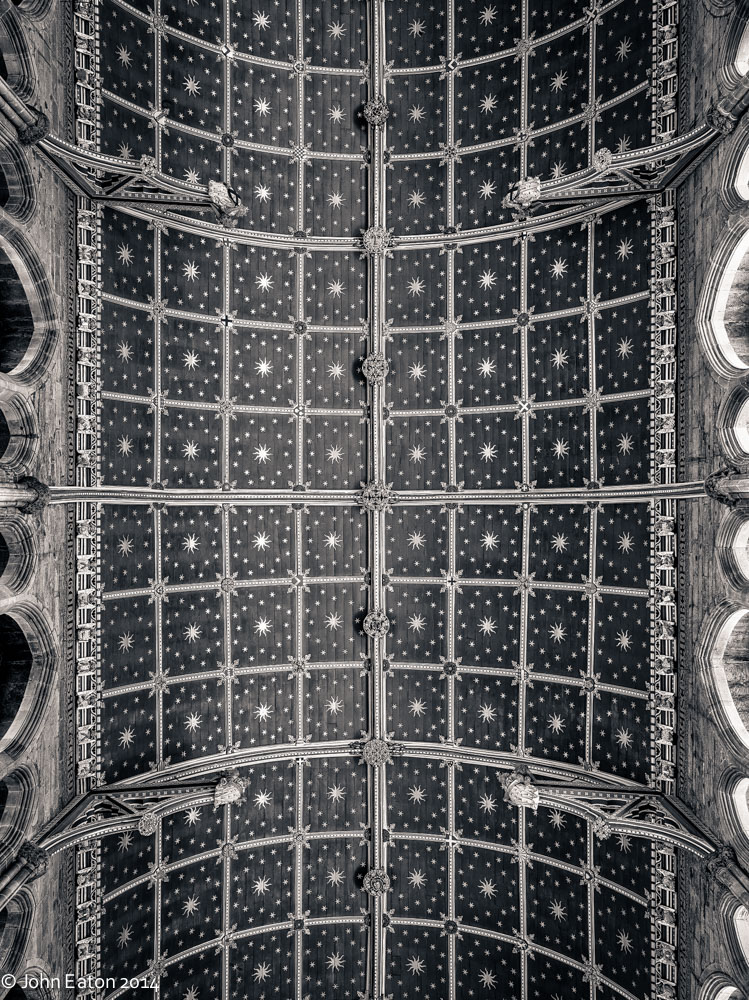