In 625, as a key element of Pope Gregory’s plan to reclaim the Anglo Saxons for Christianity, St. Augustine sent St. Paulinus north to York. There he married the Christian princess Ethelburga (from Kent) to the pagan King Edwin and, two years later in 627, baptized Edwin and his court at his new church, the first York Minster of which he was archbishop. This first church was a wooden one but was soon rebuilt in stone and subsequently expanded by King Oswald and Archbishops Wilfrid and Aethelbert in the 7th and 8th centuries. Christianity in York was intermittent and sometimes lapsed in subsequent years, especially after 868 when York was conquered by the Danes. Nevertheless, by the 11th century York was a thriving community, a major Christian site and home to a large and prosperous church, an integral part of the city.

This was all swept away by William the Conqueror – a major rebellion erupted in the north of England in 1068 which William ruthlessly suppressed, destroying the Minster and much of the city in 1069. William made Thomas of Bayeux the new archbishop of York and in 1080 he began to rebuild the cathedral. His new church was large for the time, 360 feet long, and unusual in that it had no aisles and, for a Norman church, a relatively long east end. In the 12th century the church was expanded, especially by Archbishop Roger of Pont d’ Eveque who, in 1157, inherited a church that had been damaged by fire in 1137 and somewhat neglected since. He rebuilt the quire using the new pointed arches and polished stone shafts to great effect, and also a magnificent new west front decorated with a large amount of statuary. Thus, at the beginning of the 13th century, York minster comprised Thomas’s original Norman nave and Roger’s Early English quire – nothing of this survives today, except part of the crypt.

Archbishop Gray initiated the project which eventually resulted in the complete rebuilding of the cathedral in Gothic style over the next 250 years – a primary goal was to try and exceed what was being done at Canterbury and resulted in one of the biggest churches in Europe. The stone used is a beautiful pale magnesium limestone from near Tadcaster. Work began around 1220 with rebuilding of the transepts, south first, then north. Both are very large spaces and the south transept became the main entrance to the cathedral from the city. The south transept includes one of the first gothic rose windows in England, and the north has the beautiful “Five Sisters” – five high, slim (53 feet by 5 feet) lancet windows, still some of the most wonderful Early English work of its type. The north transept was completed around 1253 and rebuilding work moved on to the Chapter House, which features a gorgeously decorated wooden roof/dome, with no central pillar, completed around 1290, when work on rebuilding the nave commenced.

Archbishop Romeyn began work on one of the crowning glories of the rebuilding effort – replacing what was already a very large Norman nave with the largest medieval hall in England, at 100 feet high and 100 feet wide (including the aisles), the highest and widest in the country. The nave has a clean, light, almost austere secular look – one reason for which is the absence of the usual dark, polished Purbeck marble shafts on the piers. Originally the plans envisaged a stone vault with flying buttresses but this was abandoned during construction and an imitation vault of wood installed (a similar thing happened with the vaulting for the transepts and probably for the same reason, lack of funds). However, the lofty aisles do have elegant stone vaults. The great west window was glazed in 1338 and the nave roofed in 1360.

The ongoing project entered its final phase in 1361 when Archbishop Thoresby initiated a rebuilding of the east end, such that the whole church would have a “uniform beauty”. The design was for the largest east end in England – 225 feet long (longer than the nave) – in the latest Perpendicular style. Work was accomplished in two phases – in the first the retrochoir and Lady Chapel, with a square east wall rising the full height of the church, was built to the east of the existing quire, so that construction did not disturb services there. This first phase was completed (but not glazed) in just 10 years. After Archbishop Thoresby’s death in 1373 work slowed to a halt and in the end it took a further 30 years from 1380 to 1410 to complete the second phase, the rebuilding of the quire.

The final element was the commissioning of John Thornton to glaze the great east window – at 78 feet high and 32 feet wide, second only to that of Gloucester in size – and his masterpiece of medieval glass remains to this day the crowing glory of the rebuilding effort. As elsewhere in York, the vault was intended to be stone but a wooden vault was actually installed. During the final stages of rebuilding the quire in 1407 it was planned to add a belfry and spire to the tower, but weakness in the foundations caused cracks and a partial collapse of the tower, so that was abandoned. Rebuilding was finally deemed complete enough for a service of consecration in 1472, the year in which the stone pulpitum was installed – construction had been underway for most of the previous 250 years

Testament to how little damage York suffered at the time of the Dissolution and during the Civil War is the quantity and quality of its medieval glass. York contains by far more of its medieval glass than any other cathedral, not only in England, but also across Europe as a whole. The closest that danger got to the minster was during the siege of the city in 1644: destruction was averted when Lord Fairfax, commander of the besieging Commonwealth forces, accepted as a condition of the city’s surrender that no harm would come to the minster.

York’s wooden roofs were to be a continuing source of problems – fires in the quire in 1829 (which also destroyed the stalls), the nave in 1840 and the south transept in 1984 destroyed the respective roofs in each instance and in each case required a period of repair and restoration. The other source of problems were the foundations to the pillars at the crossing – the cores were Norman which had been re-cased with new stone in decorated and perpendicular styles when the nave and quire were rebuilt and, in 1967, discovery of cracks resulted in a major five year effort to repair the foundations. The most recent effort is the currently ongoing restoration of the medieval glass in the east window. 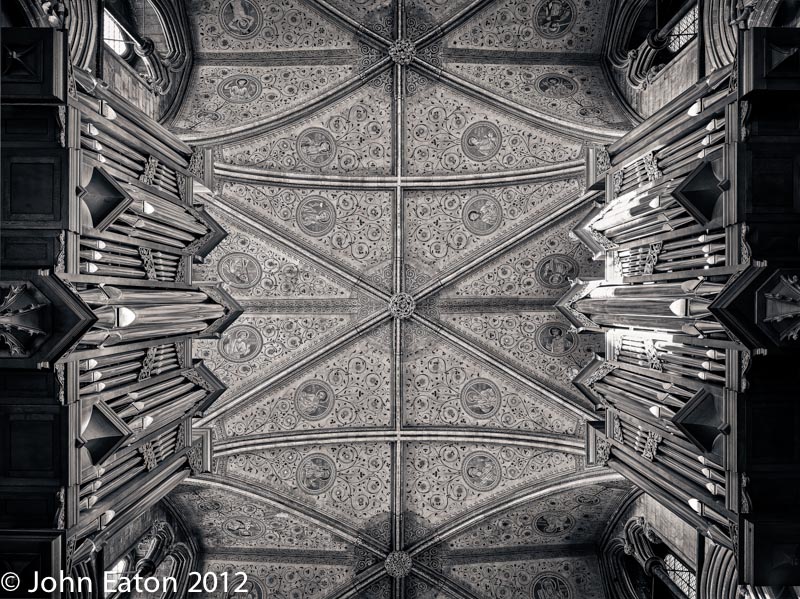