Durham Cathedral is one of the masterpieces of Norman church architecture anywhere in Europe: largely completed in the 12th century, it is unique in remaining to this day an almost complete and original Norman church, conceived and built as a single entity with only a few subsequent additions and modifications, a building of strength, dignity and grandeur with superb scale and proportions. Located as it is above the river Wear, in a group together with the castle and medieval city on a rock enclosed by the river, it is a unique historical and architectural situation.

Its origins lie with St Cuthbert: a monk at the monastery on Holy Island (Lindisfarne, off the Northumberland coast), he eventually became Bishop in 685, but died two years later in 687. His shrine remained on Lindisfarne as a place of pilgrimage until 897 when raids by the marauding Danes forced the monks to flee, bearing the relics of Cuthbert with them. For the next 100 years they wandered across northern England bearing their precious cargo and seeking a suitable place to build a new monastery. Finally, in 995, they settled on the relatively secure site on a rocky peninsular, protected on three sides by the river Wear: their new church was consecrated by Bishop Aldhun in 998, housing the shrine of St Cuthbert.

The Norman church was designed and begun in 1093 alongside the Saxon one by Bishop Carlieph (William of St Calais), appointed to the see in 1081, and the nave, quire and transepts were all completed in 40 years by 1133 (Bishop Carlieph died in 1093). The shrine to St Cuthbert was moved into the new cathedral in 1104. The quire and nave are the only one’s in a Norman cathedral in England to have been built with a stone vault from the outset (as opposed to a later addition as in some of the other Norman cathedrals), and consequently have massive stone piers to carry the weight, with buttresses at the triforium level. These piers are famous for the striking chevron decorations carved into them by the original 12th century masons – and they are truly immense, almost 22 feet in circumference.

The quire vault was completed around 1104 – a major architectural milestone and engineering feat in the invention of ribbed stone vaults: the earliest rib-vaults in Europe and the precursor of a key element of gothic architecture. The diagonal ribs supporting the vault are semi-circular, traditional Norman arches but the geometry of this required that the arches directly across the width of the nave have pointed arches (they couldn’t be semi-circular), subsequently a hallmark of gothic architecture. The Galilee chapel at the west end, with its own wonderful, chevron-decorated Norman arches and remnants of original wall-paintings, was built between 1175 and 1189.

By the mid 13th century it became clear that the east end apse and part of the quire ceiling were in a dangerous condition. As a result, the east end apse was rebuilt as the Chapel of the Nine Altars in Gothic style between 1242 and 1280. The typical gothic slender ribs and tall, narrow windows give a great sense of soaring height – the nine altars were needed because of the large numbers of monks in the monastery and visitors to the shrine of St Cuthbert. The final part of the changes to the east end was the construction of the reredos (the Neville Screen) behind the high altar and between it and St Cuthbert’s shrine: built between 1372 and 1380, using stone from Caen as in so many of the Gothic cathedrals, it was carved by the King’s masons then assembled on site in Durham. The two western towers, which give the cathedral its majestic elevation seen from across the Wear, were built to clearstory level by the Normans and raised to their present height by 1226. Finally, the great central tower was completed around 1487.

During the Dissolution the cathedral suffered significant damage and desecration to its fabric and decoration – St Cuthbert’s shrine was destroyed, the stained glass destroyed, medieval wall-paintings removed and whitewashed, statues removed, and so on – however it suffered little structural damage. Similarly during the Civil War: some damage to fabric (from Scottish soldiers), but little structural damage. However, ‘restoration’ in the 18th century (especially by Wyatt) had much greater impact, including removal of 2 inches of stone facing (ostensibly to cure erosion) and the insertion of the Rose window, and almost resulted in the total loss of the Galilee Chapel. In comparison, the Victorians were relatively restrained, removing many of the post-medieval additions, and Scott’s new screen at the entrance to the quire and restoration of the central tower are generally perceived to be a success. 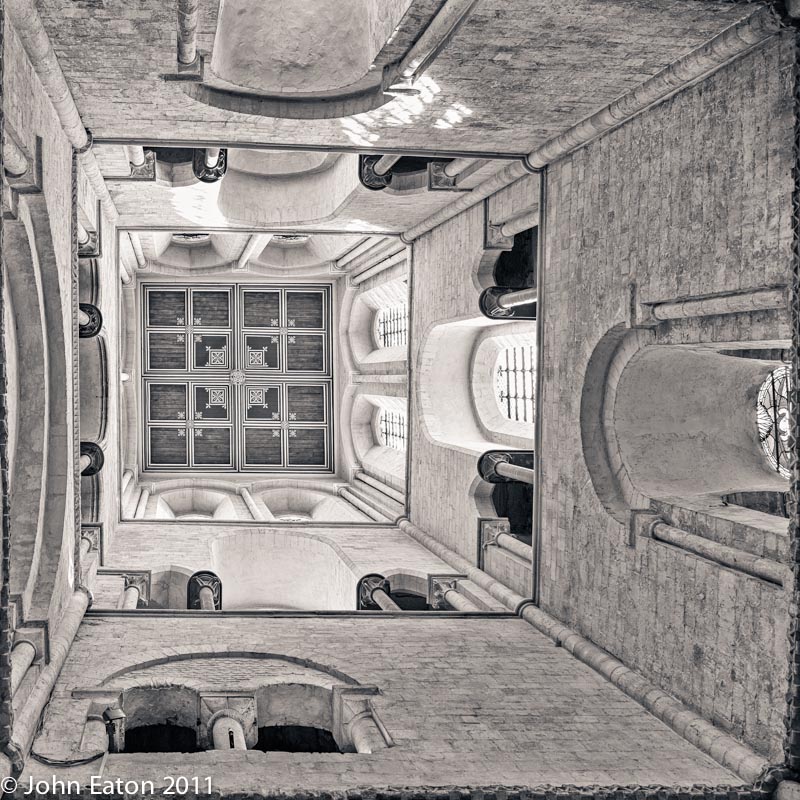