The original Saxon church was founded by Peada, King of Mercia, in about 655 but had a checkered history -- it was destroyed by the Vikings in 870 (the same attack that destroyed Ely), then re-built by the Benedictines between 960 and 970, and consecrated in 972. It was sacked in 1070 during the revolt by Hereward the Wake against William the Conqueror, after which rebuilding started in 1107 only for it to be destroyed by fire in 1116. The present Norman abbey church was begun by Abbot Jean de Seez in 1117 (de Seez died in 1125 and work slowed in the decades following his death): the work to the east of the crossing was completed by 1140, the transepts and eastern part of the nave by 1178, and the rest of the building by Abbot Benedict in 1197. Note that the main body of work was only completed toward the end of the 12th century, true to its original Norman design, by which time Hugh’s quire at Lincoln was also being completed just up the road in a totally different style.

Like its neighbors, Ely and Norwich, it’s a great example of the mature Norman style and construction leveraged and expanded on a lot of the lessons from these other two earlier Norman masterpieces -- also using the same Barnack limestone as at Ely (usefully, the monks at Peterborough owned the quarries at Barnack, one of the best medieval sources of high quality stone). The nave is of classic proportions with a flat, wooden roof and the side-aisles have traditional Norman round-arched rib-vaults -- but it is much lighter than is usual as the windows were enlarged as a part of the Late Gothic improvements. The diapered wooden nave ceiling was completed around 1220 and is the only surviving wooden cathedral ceiling of this age in England and only one of four in all of Europe – it has been over-painted twice, once in 1745 and again in 1834, but still preserves the character and style of the original.

The north and south transepts present some of the finest surviving Norman architecture, along with the apse east end. The magnificent west front was built across and around the original Norman façade around 1237, as a vast Gothic portico, and is a unique and magnificent piece of medieval architecture. Bishop Grosseteste, Bishop of Lincoln, consecrated the completed building in 1238. This magnificent Norman church has remained largely unchanged for almost 800 years, with only a few enhancements to the east end in subsequent centuries.

A Lady Chapel was added to the north-west in 1272, but was demolished in 1651 during the Civil War. In the middle of the 14th century the original Norman tower became unstable and the present Decorated one was constructed (with additional east-west arches at the crossing to support it). The central Perpendicular porch was completed at the end of the 14th century and the wooden decorated vault in the quire was installed in the 15th century, replacing the original.

As in several other churches, the space in the choir and presbytery ultimately proved too small and the east end of the church was rebuilt in the second-half of the 15th century, when a rectangular retro-choir and new Lady Chapel were added beyond the Norman apse (still known today as ‘The New Building’!), complete with the most superb fan-vaulting (this type of work, as in the cloisters at Gloucester, is unique to English cathedrals of the time). Interestingly, this Gothic rebuilding maintained the curved Norman apse inside wall and only demolished the apse outer wall to make room for the new space, so that the perspective from the nave and choir is unchanged from Norman times, with improved lighting from the larger gothic windows.

Peterborough was elevated to a cathedral following the Dissolution in 1541 and didn’t suffer from any deprivation, perhaps because the tomb of the King’s first wife, Katherine of Aragon, lay in the nave. However, during the Civil War the cathedral suffered terribly from Cromwell’s troops and most of the internal decorations and fittings were destroyed, including the quire stalls, reredos, cloisters and the Lady Chapel. Some of the damage was repaired during the 17th and 18th centuries, but much necessary and generally sympathetic restoration was undertaken in the 19th century, principally rebuilding the central tower and west front, and installing new quire stalls. The Victorians also removed the western return stalls of the quire stalls, thus opening up the magnificent vista through the full length of the church from west end to apse. 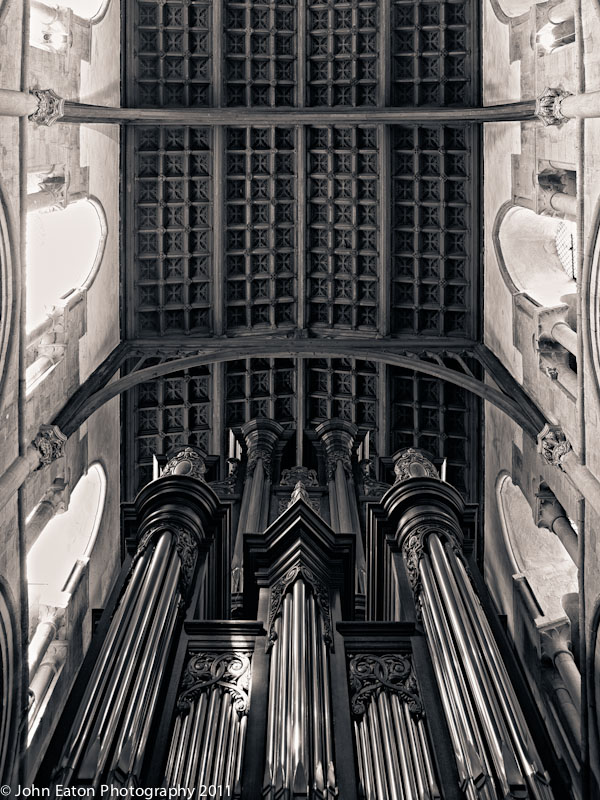