1000 years ago Winchester was the capital of Wessex and arguably the most important city in England – in 827 Egbert was crowned there as the first king of all England and Edward the Confessor was also crowned there in 1043 – after the conquest, William had himself crowned there as well as in London, just to be sure! The first Anglo-Saxon church on the site (later known as the Old Minster) was built around 648 and became the seat of the Bishop of Wessex (West Saxon) in 679. It was substantially enlarged toward the end of the 10th century (the outlines of these original buildings can still be see alongside today’s cathedral) and, housing the shrine to St. Swithun, was a major place of pilgrimage.

Thus it was fitting that the Normans built a new abbey church in Winchester that was, at the time, one of the largest buildings in the world, 556 feet long, and intended as a major symbol of Norman prestige and power. Bishop Walkelin began the new church in 1079, just to the south of the Old Minster, using a hard and beautiful limestone from quarries on the Isle of Wight.
The new building was consecrated in 1093 on the feast of St Swithun, when the saint’s relics were moved from the old minster to the new church – demolition of the old minster started the next day!

The building that we see today still largely conforms to the outline of Walkelin’s masterpiece, though with several important alterations and enhancements through the middle ages. All that remains to be seen of Walkelin’s original church today is the crypt and the transepts – the north transept in particular is a striking example of the scale and vigor of Norman architecture. In 1107 Walkelin’s tower collapsed and as a consequence the central piers supporting the new tower were built to an unprecedented size.

Additions and enhancements began as soon as the original church was completed. At the beginning of the 13th century the eastern chapels were rebuilt in Early English Gothic and extended to form the large hall-like expanse of the retrochoir, with a rectangular Lady Chapel extending even further to the east. During the remainder of the 13th century the quire was rebuilt and the Norman apse replaced by (what was becoming the traditional) English squared-off eastern end, though work progressed slowly with many interruptions and refinements. At the very beginning of the 14th century the beautiful stalls, with their intricately carved and gabled canopies, were installed in the new quire.

In the 14th century the rebuilding of the nave began with the demolition of the massive Norman west front – a process which ultimately resulted in a masterpiece of the Perpendicular but which suffered many stops and starts along the way. It was largely finished by the efforts (and bequests) of Bishop William of Wykeman (also Chancellor of England, and founder of Winchester School and New College, Oxford) – very pragmatic, he didn’t demolish Walkelin’s nave and start from scratch (as was done at Canterbury, for example), rather he basically removed the Norman arcades and upper levels replacing them with much taller and more elegant pointed arches in the arcade and clearstory levels, re-skinned the walls with new stone in Perpendicular (with stone from Caen), and replaced the wooden roof with a magnificent stone vault. The result is the most homogeneous part of the cathedral, twelve bays long, all with common plan and details, and a wonderful sight to behold!

Wykeman’s successors, Beaufort and Waynflete, continued his good work – Beaufort paid for a new shrine to St Swithun and a gloriously carved 36 feet high stone reredos (the Great Screen) behind the altar, which were actually constructed by Waynflete – and both had magnificent Chantry Chapels built in their honor in the retrochoir next to the new shrine. Later bishops started alterations to the east end with the goal of making the whole cathedral Perpendicular, but the Dissolution put an end to that. So we’re left with a masterpiece of church architecture – a Norman core still visible in the crypt and transepts, an Early English retrochoir, with Perpendicular enhancements, a Decorated quire, and a magnificent Perpendicular nave.

At the Dissolution the priory was dissolved, most of the treasures stolen, and several of the monastic buildings destroyed, most notably the cloisters and chapter house. During the Civil War the cathedral suffered some damage, especially the destruction of the library and the medieval glass in the great west window – after the Restoration the broken glass was retrieved and assembled randomly in the window. Because of the wealth and importance of Winchester, regular maintenance of the fabric was undertaken and there was little need for Victorian interventions.

The cathedral lies in a hollow of the chalk downs, close to the river Itchen, and was built on marshy ground, which caused increasing concern regarding subsidence and potential collapse. This reached crisis levels toward the end of the 19th century and at the beginning of the 20th century perhaps the most important restoration work on any English cathedral was undertaken by a deep-sea diver, William Walker: he worked in total darkness in up to 20 feet of water for 6 hours a day from 1906 to 1912, underpinning and reinforcing the waterlogged foundations with 25,000 bags of concrete, 115,000 concrete blocks and 900,000 bricks. As the statute to him in the cathedral testifies, he “saved the cathedral with his two hands”. 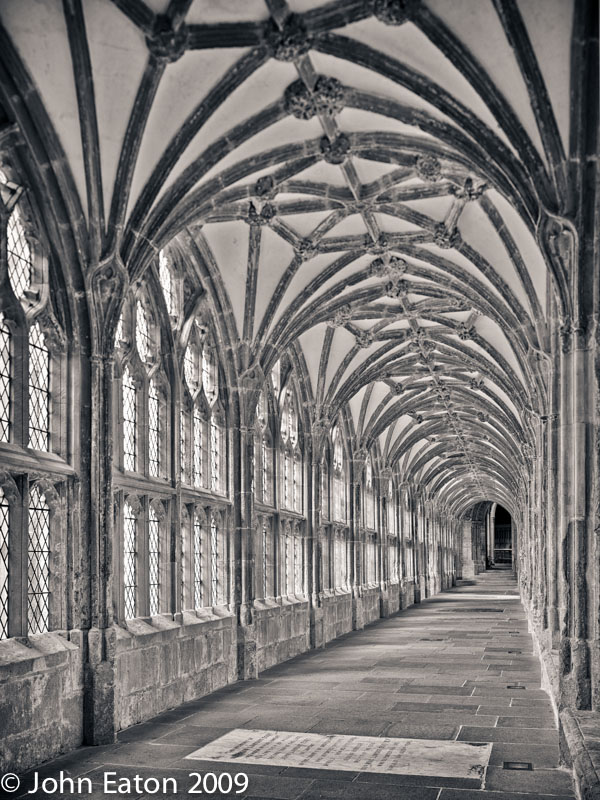